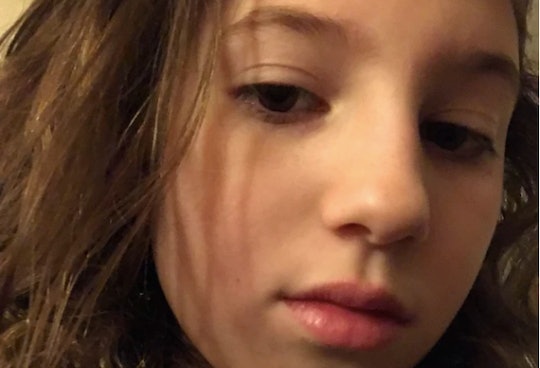 My Daughter Is Obsessed With Taking Selfies & It Terrifies Me

I don’t remember the events of my tween years as viscerally as I can recall my feelings during that time. Everything was dialed to 11. When things were bad, they were the worst. So I have a lot of empathy for my 10-year-old daughter when she’s gets “emotional” about something concerning a friend or a school assignment. And, recently, I’ve been fearful. With more of her friends having social media accounts, she’s become obsessed with taking selfies, and I’m terrified. While she does not have her own smartphone, I have allowed her to chat with her friends using my device (which means I read her texts, and take the phone away during periods where we don’t allow screen time). The conversations are mostly about homework and sending each other Bitmoji after Bitmoji of themselves dabbing. It’s all kind of adorable.

But then I catch her posing and taking pictures of herself, over and over and over again. She gets dressed up to go to the ballet, and she has to take a snapshot of her outfit. She videotapes herself making slime (though we forbid her from uploading it on Youtube). She rearranges the furniture in her room and makes herself the star of her tour through it. On one hand, I admire her confidence and and improv skills.

On the other hand, I’m totally freaked out by how many selfies she takes.

I find them by the dozens on my phone. She is playing with mood: skeptical, aloof, pensive, tough. Rare is the selfie that captures unbridled glee. I am usually the one photographing her at those joyful times, because I’m the one who most needs to remember I gave my kids a happy childhood. And those are the ones we print for the grandparents.

I was a chubby kid who was always reminded — by doctors, and parents, and images of women in the media — that I’d be better off if I was simply thinner.

My fear about the selfie obsessions stems from my own struggles with self-image. I grew up hating my body. I was a chubby kid who was always reminded — by doctors, and parents, and images of women in the media — that I’d be better off if I was simply thinner. I was active and in good health, and yet my sole focus was the number on the scale and in my clothing tags. I was obsessed with going lower.

I overate and over-exercised to compensate. It wasn’t until I was in my 30s, and gaining pregnancy weight, that I began to finally evolve my self-perception. My body was now growing a new person, a baby my husband and I very much wanted, and I was going to treat my body with respect to give it every advantage to build a good human inside. Postpartum I worked through the fact that my body would never be the same again. But having grown and given birth to a baby made me appreciate my body for what it could do and not what size it was.

Thankfully, my daughter is not exhibiting any struggles with her body image. She is comfortable in her skin. I detect no sheepishness about her size or shape, and it seems as though she never feels the need to cover up, as I did at her age. And part of that is because her father and I do not often remark on her appearance. I tell her I like how she puts an outfit together, or comment on how strong she is looking in the water as she swims. But I refrain from saying she’s “pretty” or that she “looks nice.” I want her to feel good, and for that feeling to come from who she is, and now what’s on the outside of her.

I want her to feel good, and for that feeling to come from who she is, and now what’s on the outside of her.

Selfies, to me, are scary because they admit that we are trying to present a specific version of ourselves. My daughter’s selfies show me that she has a plan for how she wants the world to perceive her. While this is ultimately a good thing — a girl taking charge of her own image — it begs me to wonder if she is seeking approval from others. I don’t like the idea of her performing for others to comment. I don’t like that she presents her image, and only her image, with no context. There is so much missing from these close-ups of her face: you can’t see her kindness, her sense of humor, her passion for art and dance and graphic novels. All you get from her is a stare, and it feels empty and wrong.

While I maintain hope that my daughter will continue to feel confident, and take up as much space in this world as she wants to as she grows into adulthood, I hope she will turn her gaze more inward. I don’t want her to lose sight of who she is, and who she wants to be, while she scrutinizes the expression on her face.

Recently, a modeling scout approached us at the mall. She noticed my daughter and just launched into her pitch about what great opportunities might away my kid in the field of modeling or acting. “What Disney Channel shows do you watch?” she asked, and my daughter rattled off a bunch, her eyes lighting up. The girl does have some acting ambitions.

I took the scout’s card, thanked her politely, and let my daughter know we would not be pursuing any kind of acting or modeling work for her (mean mom in full effect). I explained why: “That woman came up to you because of how you looked. She assumed you’d be flattered that she thought you could be on TV because of your appearance. But she doesn't know anything about you. She doesn’t know if you can act, or anything. She is judging you… on how you look.”

If there is one thing about body image that I will always drill down to my kids it’s that we are complete people, and if they are not working on who they are on the inside, there is nothing on the outside that will serve them.

My daughter got it, though was still kind of annoyed that I wasn’t about to open this supposed gateway to stardom. If there is one thing about body image that I will always drill down to my kids it’s that we are complete people, and if they are not working on who they are on the inside, there is nothing on the outside that will serve them.

I’m not going to discourage my daughter from taking selfies. It’s her way of figuring out who she wants to be. And as long as she’s using the camera for other things — her DIY crafting videos, and facetiming with her cousins — I think it will be OK for her to be self-reflective. Her Girl Scout troop is going to be working on their photography badge, and we’re thinking of doing a selfie project. My daughter and her friends will show the world what they see in themselves, and I think that will truly be beautiful.