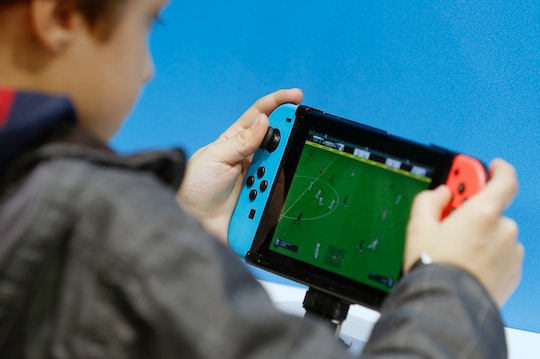 If your kid hasn't been begging you and Santa for a Nintendo Switch this year, consider yourself lucky. The gaming system is a hot item, and multiple stores are offering Nintendo Switch Black Friday deals, but they aren't all created equal. Every store's promo includes the system, but if you want more bang for your buck, that's where it gets tricky.

Nintendo announced that it will be releasing a Black Friday bundle at select retailers including the Switch console and a digital download of the Mario Kart 8 Deluxe Edition game for just under $300. (For reference, the console alone is normally priced at just under $300 and the game typically costs $60.) Retailers offering this bundle include Target, Amazon, Best Buy, GameStop, and Walmart.

While, yes, each of these stores is carrying the bundle, many of them are offering different add-ons with it. GameStop is selling the bundle as advertised by Nintendo, but is also offering a $25 gift coupon to anyone who purchases the bundle on Thursday, Nov. 28 or Friday, Nov. 29 (note: the gift card can't be used until one day after the bundle purchase, and there is a limit of one per customer). Best Buy is also offering the $300 bundle, but they're throwing in a free screen protector (there are no details on which protector is included, but the price range is from $10 to $30 on their website).

Target, Amazon, and Walmart don't seem to be adding anything extra to their deals at this time. However, Target RedCard holders get their normal 5 percent off purchases (yep, even on Black Friday!) which reduces the price to $284. If Mario Kart 8 isn't on your kid's wish list, in addition to the Black Friday bundle, Walmart is also offering Nintendo Switch console bundles with either Minecraft or Spyro Reignited Trilogy for just under $300, and you don't have to wait to purchase either of these, because they're available now (note: these games are not digital downloads).

Kohl's is one retailer that didn't partner with Nintendo for the Mario Kart 8 Deluxe Edition bundle but still has a great deal. They're offering the Switch bundled with a carrying case (normally $20) as a doorbuster deal for $320. While the deal is technically at cost, you also get $90 in Kohl's cash with the purchase, which can be redeemed any time between Nov. 30 and Dec. 9 (note: the Black Friday additional 15 percent off coupon can't be used on this deal). Bonus: you can use the Kohl's cash to purchase the Mario Kart 8 Deluxe Edition game and you'll still have $30 left over for something else (maybe for yourself?).

So, in the end, the best Nintendo Switch deal is whichever has the perks you want most.