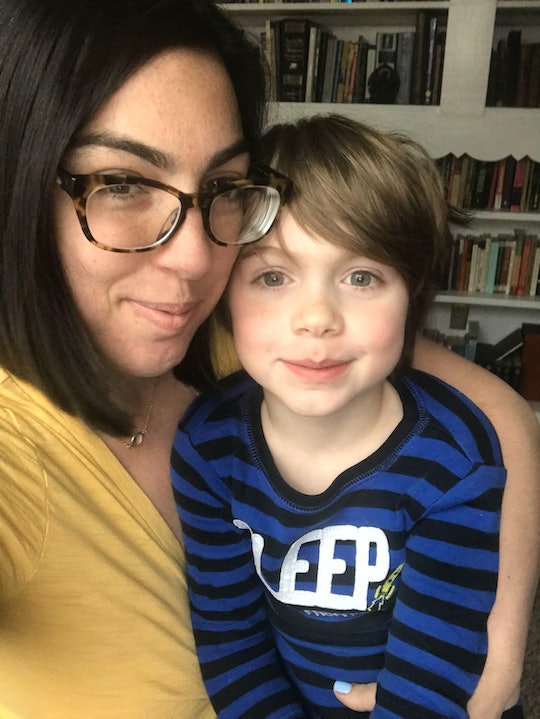 People Call My Son Brave & I'm Already Over It

My son came into the world with a pissed off scream and eyes wide open. The first picture I have of him shows him bloody and grasping at the doctor's face mask, which is a pretty good representation of this side of his personality. So when people call my son brave, they're not lying. He took his first steps when he was 8 months old, and seemed to always have a bump on his head until he was about 2, on account of constantly taking a spill while exploring someplace new. He's been climbing to the top of the jungle gym since he was a toddler, often to the horror of other parents. He's bold, assertive, and insistent.

More Like This
The Longest Kids Have Gone Without Washing Their Hair, According To 25 Moms
How To Celebrate Pride As A Family
Where To Travel With Your Kids This Summer
Ayesha Curry’s Chicken Bites Are Irresistible To Even The Pickiest Eaters

I'm not saying this to boast or smugly pretend to be irritated, of course, but rather to prove that I don't think the people who are calling him brave are annoying or obnoxious. Their observation is accurate (if I do say so myself), not to mention appreciated! Bravery is a virtue to which we should all aspire, and I think it's a lovely compliment. Individual instances of people saying something nice aren't my issue.

My son is also flamboyantly dramatic. He'll look at the magnolia tree blossoming in our yard, clap his hands together next to his cheek and exuberantly declare "Oh mommy! Look at the beautiful pink flowers!" His expressions and hand gestures look exaggerated but come to him very naturally. Up until kindergarten he loved to wear princesses dresses and pink. He loved the Tinkerbell movies and My Little Pony. He doesn't anymore, at least he pretends he doesn't.

My son is extremely sensitive, and will cry at the drop of a hat. The other day he cried because his stuffed animal was "too cute," you guys. Up until recently he would be comforted by a hug when he was upset or overwhelmed. Lately, however, he usually just wants to be left alone. He doesn't want anyone to see him cry.

My daughter is every bit as adventurous and brave as my son is. Yet I think the only people who have ever called her "brave" are me and my husband.

I love his good-humored drama and sensitivity as much as I love his bravery. They are as much a part of him as his adventurous spirit. But no one ever compliments the fact that he sometimes talks like a silver-screen ingenue from the 1930s. Some people might find his sentimentality endearing, but those people are getting fewer and fewer the older he gets and, instead, are being replaced with people who tolerate his emotional nature before telling him to calm down.

My daughter is every bit as adventurous and brave as my son is. Yet I think the only people who have ever called her "brave" are me and my husband. If this aspect of her personality is ever commented on it's dubbed "spunky" or "feisty" or "sassy" (which, incidentally, is the same descriptor she gets when she's not being compliant). She's not quite as sensitive as my son is, but she also feels big — even for a toddler — and her emotions are indulged far more, and not just because of her age. People fawn over how loving and sweet she is.

I don't think people mean to highlight my son's bravery and dismiss his empathy.

The most common compliment she (and, indeed, I think most little girls) get is "pretty" or "beautiful."

And I'm not complaining about any of this, either! The people who tell her she's a doll are also not wrong! Neither are they doing anything annoying or malicious. But, as with my son, they're only encouraging certain aspects of her personality while completely overlooking other, equally prevalent and equally noble qualities. And, the truth is, what is encouraged in each of them is often based on their gender.

I don't think people mean to highlight my son's bravery and dismiss his empathy. I don't think they mean to highlight my daughter's looks and downplay her personality. In fact, I don't think they even know they do it. Hell, I'm sure I do it at times, too! But it happens and that undeniable fact makes me sad. Because the world needs sensitive boys and brave girls (or, more accurately, boys who are confident in their sensitivity and girls who are assertively brave). Gender is often used as a dismissive shorthand, like: "This person, whom I perceive to be male/female will demonstrate qualities X, Y, and Z, as we expect they should." But when something falls outside those guidelines, it's ignored or, worse, discouraged.

I know not everyone in the world is going to see my children for all their nuance and quirks. Frankly it would be weird if they did, and I'm not asking that people do. But it's disappointing that, because of gender expectations, only certain aspects of them will be seen at all by the world at large. As such, other traits may diminish, or stagnate, or even be repressed. I'm already seeing that in my brave boy.

So, thank you, and yes, my son is brave. But let me tell you how compassionate, sweet, and silly he is, too.