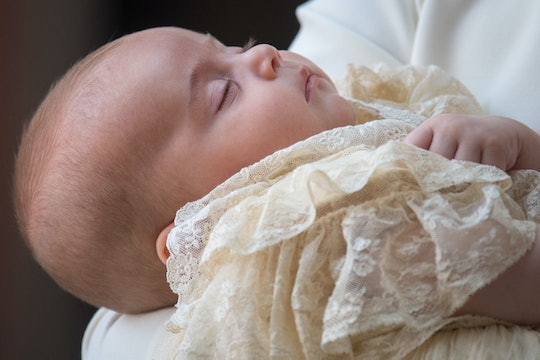 Prince Louis Is 1 Year Old Today! Here's A Look Back At His Royally Cute Moments

Special moments in the royal family have just flown by one after another in the past year. Really, can you believe Kate Middleton and Prince William's youngest child, Prince Louis, is officially 1 year old today? Me either. Once the shock has subsided, let's have a look back at the royal tot’s most exciting moments of the past 12 months to celebrate this very happy occasion.

Prince Louis turned 1 year old on Tuesday, April 23, but reports from before then suggested that his family may have celebrated just a bit early this year. They’ve reportedly been at their country home on Sandringham Estate, Anmer Hall, for the Easter holiday, according to Hello! Magazine.

Since Prince Louis’ brother and sister, Prince George and Princess Charlotte, will likely be back in school by the time his birthday comes around on a weekday, it was thought that the family might celebrate a few days earlier while they all had a relaxing weekend, according to Hello! Magazine. Presumably, there were more family members up at Sandringham for the holiday as well, so it would have been a good chance to celebrate with everyone together. Frankly, that just sounds like the perfect excuse to have two cakes.

Regardless, time is flying by and while the little one has been growing, he's also made a few appearances here and there. And here are few of the highlights from little Prince Louis’ first journey around the sun.