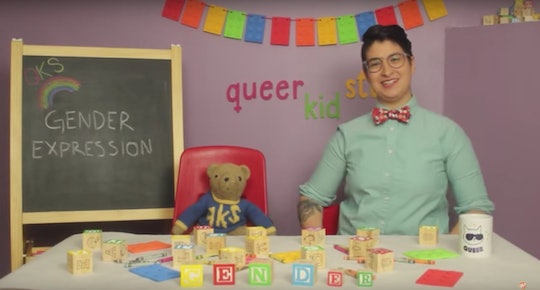 Today, more and more kids are accessing their entertainment via tablet apps and streaming services. The days of kids waiting for their favorite cartoon to air after school are behind us, and now our children have unlimited online options. Fortunately, sometimes these options prove to be more diverse and inclusive than ever before. Take, for example, a YouTube channel called Queer Kid Stuff. Created for kids ages 3 and up, Queer Kid Stuff takes topics like gender identity and consent, and breaks them down for young audiences. While one could describe it as LGBTQ+ 101 for kids, it's really so much more.

Created by 26-year-old Lindsay Amer (they/them), Queer Kid Stuff is a 10,000 subscriber-strong YouTube channel starring Amer and their friend Teddy — a teddy bear Amer has owned since they were a child. Teddy and Amer spend each episode educating kids about a number of topics, including but certainly not limited to: what pronouns are, marriage equality, the importance and complexity of coming out, disability, race, and body positivity, as well as a few good storytime episodes. Romper spoke to Amer about the challenged they faced, the positive feedback they've received, and the importance of sharing these inclusive conversations with our children at an early age.

Amer studied theater and gender studies at Northwestern University, then theater and performance at Queen Mary University in London, before entering the children’s entertainment space by way of children’s theater. They did their best to seek out plays with LGBTQ+ themes — a topic that they were passionate about pursuing. Unfortunately, not every audience took kindly to this particular career change.

I get a lot of really positive feedback, which is wonderful.

“I was getting kind of frustrated with the gatekeepers that come along with trying to get queer work into schools,” Amer tells Romper via phone. That’s when Amer turned to YouTube, knowing they could reach interested families and young kids directly and with positive messages about acceptance and inclusivity. It’s been a passion project since, and Queer Kid Stuff now has over 60 videos on the channel that parents, and children, can choose from.

In 2016, Amer launched the channel with the help of a number of friends, and the team behind Queer Kid Stuff has now grown to include a fan-turned-crew member. The show has also featured a few guests on the channel, including popular YouTuber Riley J. Dennis, Ali Stroker (the first actress in a wheelchair to perform on a Broadway stage), and intersex activist Claudia Astorino.

And despite the initial difficulties, since launching the channel Amer has been met with plenty of positive reactions from fans. “I love hearing from people my age,” Amer says. “I hear a lot from parents and kids even... who tell me their favorite song, or their favorite thing about me or about Teddy, and about how they can relate and that they have questions. I get a lot of really positive feedback, which is wonderful.”

Amer hopes to be able to produce more episodes where other guests can discuss what it’s like to be queer, and possibly even a takeover show where queer kids can host and talk about issues that matter to them.

Unfortunately, there has also been a fair amount of backlash, no thanks to a seemingly never-ending pool of online trolls who claim Amer is attempting to “indoctrinate” children. Amer notes that the online harassment has been the biggest challenge for them, especially when it comes to maintaining their channel and the platform. “I get a lot of hate online, definitely through social media," she says. "I have people who track my every move, looking for what kind of personal info I put out there.”

As a result, Amer does their best to keep a low profile in their private life, and has disabled the comments section on their YouTube channel for arguably understandable reasons. Still, they don’t allow the ignorant vitriol of trolls to stop them from continuing to create positive, queer-friendly content for all ages. In fact, Amer is currently raising funds via a Kickstarter campaign in order to continue to produce Queer Kid Stuff (the campaign ends June 8). Amer hopes to be able to produce more episodes where other guests can discuss what it’s like to be queer, and possibly even a takeover show where queer kids can host and talk about issues that matter to them.

Most of all, Amer hopes that viewers’, and especially childrens’, main takeaway from watching Queer Kid Stuff is a message of self-love and self-acceptance. “[I want them to know that] it’s OK to be who you are,” she says, adding that it’s OK not to exactly know who that person is all the time. Basically, Amer wants viewers to, “just be happy with the way that you are.”

Definitely a message we can all get behind, especially as we celebrate Pride Month and remember that were always stronger, together.

More Like This
From Captions To Gifts, These Are All The Kindergarten Graduation Ideas You Need
17 Best Potty Training Products For Toddlers
These High School Graduation Speeches Will Give You Hope For Our Future
The 40 Best Toys For 6-Month-Old Babies