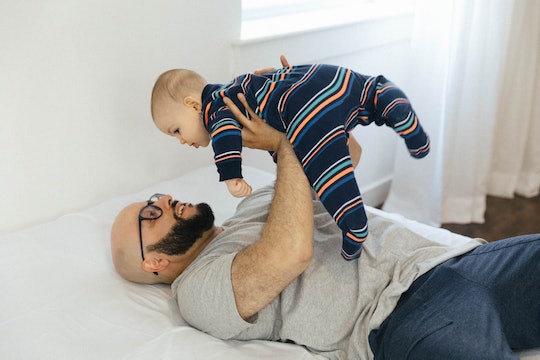 Sorry, But Dads Should Absolutely Be Blamed For These 9 Things

When I entered my second trimester with my second kid, I suddenly became very angry. It probably had to do with exhaustion from chasing a toddler around while growing another kid, but I was very cranky for the remainder of my pregnancy. I found fault with things that wouldn’t have bothered me normally, and I probably misdirected some of that rage, unfairly, toward my husband. Whatever, though. Logic be damned, I say. I was growing a human, people, so sorry not sorry, but there are things dads should absolutely be blamed for. My "poor" husband should be able to handle being on the receiving end of my annoyance while I grow miniature arms and legs inside my body.

A generation ago, moms like mine could have blamed dads like mine for not taking on a lot of the caregiving duties. More dads are staying home with their kids these days, though, and even though my husband and I both work, we try hard to divide and conquer. While we don’t do the same things (I was the one who breastfed and schedules the pediatrician appointments, while he assembles baby furniture and is all about the dentist check-ups), there isn’t a huge difference in the amount of effort we put in taking care of our children. While I do shoulder the more mentally draining tasks (like, for example, anything having to do with school), I know I can always enlist my husband’s help if I’m tapped out.

Still, that doesn’t mean I’m not highly critical of how he parents. I’m trying not to be, but I’m a work-in-progress, just like all moms. And, of course, my husband is a work-in-progress, too. I have to remind myself of that, and often. So on top of some truly messed up things — like putting on diapers backwards, or letting my 7-year-old daughter out of the house with just tights on because he thought they were leggings — my kids’ dad should absolutely be blamed for the the following things. This is part of the parenting contract, people. I don't make the rules.