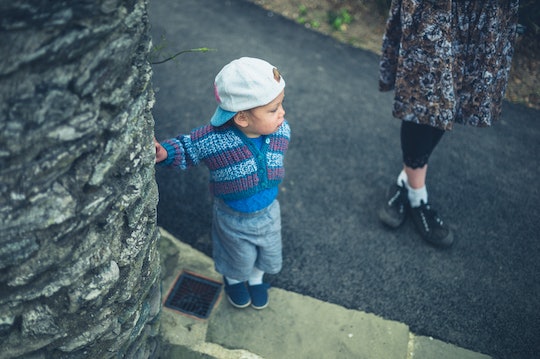 Actually, Teaching Your Kid About Consent Is Harder Than You Think

Being a parent is never easy, and I'd argue the prevalence of technology in our children's lives has only made it harder. As parents we can't shy away from tough topics like bullying, drugs, sex, respect, and consent, because if we don't teach our kids the internet will. And as the mother of two intelligent, compassionate, self-assured kids myself, I can tell you that teaching your kid about consent is harder than you think. While it's a vital lesson, and one I try to teach my kids every single day, I struggle to toe the line between consent and simply parenting my children in a way that keeps them safe. Because, sometimes, keeping my kids safe and healthy means ignoring them when they say no.

According to the Virginia Sexual and Domestic Violence Action Alliance, a reported one in five women first experienced some sort of physical and sexual violence between 11 and 17 years of age. And according to the Rape, Abuse & incest National Network, (RAINN) there are 321,500 victims of rape and sexual assault each year in the United States. A 2015 poll poll conducted by The Washington Post found that 18 percent of college students believe as long as someone doesn't say "no," consent was acquired, instead of hearing an enthusiastic yes.

As a mom, these statistics — along with countless others that are just as disturbing — impact my parenting. I want to raise children who will unapologetically seek out and demand consent, in all aspects of their lives but especially their future romantic and sexual relationships. One way to ensure that happens is by mirroring consent in my home, and respecting the bodily autonomy of my very own children. If I force them to do something with their bodies they don't want to do (say, hug a relative or kiss a parent) I am undermining their humanity and subtly teaching them that consent is not a requirement when touching someone else or having someone else touch them. Those aren't lessons I want my children to learn.

But I have to give my children a bath, even when they say no. I have to ignore their pleas when they say they don't want to go to the doctor, because I believe in science and vaccinations and keeping my children immune from deadly diseases. In other worse, I ignore their "no" and don't seek out their consent pretty regularly, because, as the parent, it's my job to do what is best for my children... especially when they can't or won't do what's best for themselves.

Yes, I will grab my child's hand, often without his permission, when we're crossing the road. And, yes, I will also tell my son that he doesn't have to hold anyone's hand if he doesn't want to.

So, how do I reconcile the need to teach consent and respect my children's wishes, with the need to keep them safe and healthy and thriving? How do I impart a vital lesson that will undoubtably impact them for the rest of their lives, when I have to undermine that lesson in order to make sure they keep living their lives?

When you have children, the lesson of consent isn't a one-time conversation, or even a few-times conversation — it's ongoing, indefinitely. I've realized that now more than ever, especially now that my daughter is 11 and my son is 6. When I see my son's friends tackle him on the playground, and his visible, upset reaction coupled with his silence, I know I have to sit down and discuss his right to tell someone "no." And perhaps, during that conversation, my son will question why no one has the right to touch him without his permission, yet the doctor will give him shots even though he says no. Perhaps my daughter will wonder why she has the right to tell a boy at school not to touch her, but she can't refuse my shower and hygiene requirements. And if they do, that'll be an ongoing conversation, too.

Because in the wake of the #MeToo and #TimesUP movements, I fear we've lost sight of an undeniable truth: conversations about consent are and should be nuanced. They're not black and white, but varying shades of grey. And that's never more apparent than when you're a parent and tasked with teaching your child consent, while simultaneously forced to ignore consent for their betterment. Yes, I will grab my child's hand, often without his permission, when we're crossing the road. And, yes, I will also tell my son that he doesn't have to hold anyone's hand if he doesn't want to. Those two conversations can, and must, coexist if I want my child to grow up safe and capable of engaging in and maintaining healthy relationships.

They will know why their "no" matters, and why, as their mother, sometimes I have to ignore it.

I'm of the mind these conversations should begin early and happen often, too. So why does it sometimes feel like I'm spinning in circles? There's no magic formula, to be sure, and no one "thing" that works for every parent and child, but teaching these lessons in a way that makes sense — in a way my kids can understand — has proven more difficult than I anticipated. Just recently, my son was pushed to the ground while playing tag. When we spoke about the incident, he became understandably confused about the rules of consent. When it's OK to touch someone? When is it not? When should you listen to someone saying no? When is it unsafe to do so? While there's truth in saying "my body, my choice" or "no means no," there are also instances, especially for children, when that's simply not the case. For example, my son might scream "no" when I grab him from running into a busy street, but I shudder to think of what might happen if I listened to his "no" and didn't ignore the need for his consent.

Surely I'm not alone in my struggle to teach my kids consent in a way that's fair and easily understood. As their person — the one they run to and rely on and look up to — I don't want to look like a hypocrite. I don't want to follow the "do as I say, not as I do" parenting model. But I know there are times when being the parent they need means ignoring them when they say "no," while simultaneously reminding them that they have the right to tell someone, anyone, "no." I have to, as a parent, make room for nuance in these conversations, even the age-appropriate ones for my youngest, so that my children can learn the difference between a trip to the pediatrician and a child touching them on the playground.

Like any parent, all I can do is my best. Just like I give my children room to learn and grow and fail, I have to give myself the room to do the same. And as I have grown kinder and more understanding of myself and my struggle to teach this valuable lesson to my children, my kids have benefited. With the right information, and the best examples I can provide, I know my kids will be able to stand up for themselves, and others, when they need to. They will know why their "no" matters, and why, as their mother, sometimes I have to ignore it.