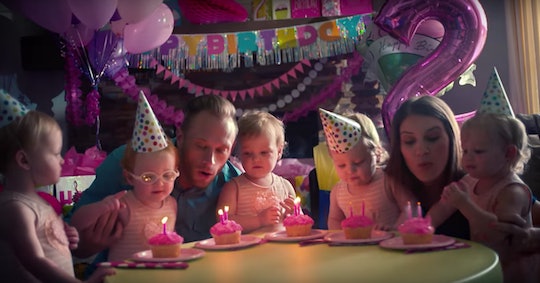 The Story Of The Busby Quints' Birth Is Truly Awe Inspiring

Fans of TLC's OutDaughtered just can't get enough of Danielle and Adam Busby, and their adorable quintuplets. After all, the five Busby girls are growing up before their very eyes, so it's hard not to feel like a part of the family. And when you learn about the Busby quints' birth story, you can't but want to shower them with your love and support.

The third season of OutDaughtered premiered last month, but the hit TLC show has been on the air since 2016, a year after the quintuplets were born at Women's Hospital of Texas in Houston. But the five girls, who turned 3 years old on April 8, made a splash before starring in their own reality TV series: When they were delivered, they made history as the first all-girl quintuplets ever born in the United States, or anywhere in the world in nearly five decades, according to ABC News.

The birth, though, seemed to be a pretty intense experience for the Busby family. The five girls — Hazel Grace, Parker Kate, Riley Paige, and identical twins Olivia Marie and Ava Lane — were born prematurely, at 28 weeks, ABC News reported. They spent more than two months in neonatal intensive care.

The girls had to be delivered via Caesarean section, according to NBC News. It took the doctors at Women's Hospital of Texas four minutes to deliver all five girls, who were just one of two dozens quintuplets born that year, according to Multiples of America data.

Adam Busby, who's also father to 7-year-old Blayke Louise with Danielle, told NBC News a week after their birth:

The doctors, we owe a lot to them. We had the best team of doctors there. We had the A-team to assist with this birth. Now we have five baby girls back in the NICU that are thriving.

Both Blayke Louise and the quintuplets were conceived using intrauterine insemination — or IUI — fertility treatments, according to NBC News. When the five girls were born, they weighed about 2 pounds, on average. Because they were delivered 12 weeks early, they had to be put on oxygen to help their premature lungs, NC News reported.

Parker Kate and Hazel Grace were the first two of the quintuplets to head home from NICU in June 2015, according to ABC News. Adam Busby told ABC News at the time:

Everything we are doing now is almost not a big deal. We are very excited to have all the babies home.

Three years later, and the Busby quints are happy and thriving. The five little ones just had their first day of pre-school, which Adam captured on video and posted to his YouTube channel last week. He also happened to record Hazel's attempt at eating a mouthful of marshmallows, which he posted on his Instagram Story. Another cute off-camera moment: When Hazel says "See you later, alligator" in a video clip Adam also posted on his Instagram Story, according to inTouch Weekly.

Of course, not every moment of the Busby family's lives is documented by TLC cameras. But Adam and Danielle keep fans of OutDaughtered in the loop with their very active social media presences. Any milestone that fans of the hit TLC series may miss on television, they're sure to see on either parent's Instagram or Twitter accounts. The couple from League City, Texas is definitely one that wants to let you into their everyday world, and feel the love and joy they get to experience as parents.

That includes the challenges of getting six children, five of whom are toddlers, to follow a chore chart. I can't even get that done with one 3-year-old.