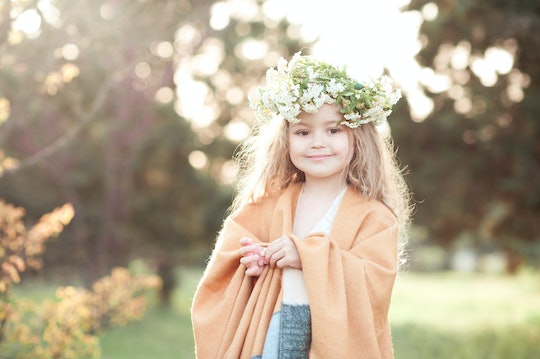 In our culture, the majority of people seem to be absolutely obsessed with gender. As soon as you announce your pregnancy, people can't wait to find out "what you're having." And if you choose to reveal the sex of your future child, people tend immediately start putting your fetus in a gendered box. It doesn't stop there, either. People in our culture expect girls and boys (and women and men) to act a certain way. Honestly, there are so many things girls learn by age 5 that promote gender stereotypes that are as problematic as they are potentially harmful.

Unless you specify otherwise, the moment your baby is born they're inundated with either pink or blue, as if to tell the world they'll grow up to act certain way and according to their gender. But gender is not a binary, and there's absolutely no way to predict a child's likes, dislikes, personality, or demeanor based on the box the doctor checks on their birth certificate. And what if your child grows up to realize they don't fit inside a perfectly gendered box? Gender roles are social constructs created to attempt to easily define people, when human beings are anything but easily definable.

If we teach our daughters they're more than just pretty faces and that they can raise hell once in a while, more women will become CEOs, and scientists, or we will see a female president in the White House.

As a culture, we objectify little girls by dressing them up in pretty clothes, complimenting them on their looks, and telling them they should sit still, be quiet, and look pretty. Research shows that objectification often becomes internalized and can have lasting results, leading to problems with body image, self-esteem, disordered eating, and even academic and athletic performance. When we prioritize how a girl looks, we send the message that it's more important that she be pretty, than be smart, strong, or kind. And yet, if we hold our daughters to the gendered stereotypes society has created for them, that's exactly the message our girls will internalize.

According to a report compiled by Common Sense Media, research shows that as young as 5, girls start to see thin as an ideal body type, and dieting and food restrictions as ways to meet this ideal. The research found that everything from the dolls we give them with unrealistic body types, to the media they view starring pretty, thin princesses, and even the things their parents say about our bodies in front of them, can impact their body image, expectations, and ideas about how they are supposed to look. My daughter was 4-years-old the first time she told me she didn't want to look fat. A 4-year-old, you guys. We had the first of many discussions about what "fat" means and about liking your body for being strong and doing things you enjoy, but even sending these positive messages to my daughter was difficult. I grew up in the same society she is now embracing and, as a result, have a ton of baggage concerning my own self-worth, confidence, and body positivity.

My daughter was 4-years-old the first time she told me she didn't want to look fat.

As individuals living in a patriarchal society reliant on the gender binary and the stereotypes associated with it, we often set different expectations for boys and girls, and without even realizing it. Have you ever heard or said something about boys being rowdy and loud and girls being quiet and proper? I hear them every damn day, even though my children do not innately adhere to that stereotype. If you go into any baby clothing store, you are likely to see onesies with messages about girls marrying Prince Charming or being locked up, too, which make me so mad. Why do we have to talk about girls like they are only valuable on a man's arm, or like they are objects to be controlled by their fathers. It's so gross, not to mention heteronormative.

Starting in preschool, my kids' school had different dress codes for boys and girls, too. Regardless of the intentions behind these arbitrary rules, these policies subtly teach girls to be ashamed of their bodies, that boys can't be expected to control themselves, and that their education and comfort is not important. At least, not as important as a boy's.

It seems like people assume what their children will like and be like from the moment they are born, dressing our sons as football players and girls as cheerleaders. And gendered language is often used to insult. When people use the word "girl" when they really mean bad, weak, or subpar (see also: pussy, woman, girlie, and gay), or "throw like a girl," when they really mean, "throw badly," they send a not-so-subtle message to our daughters that they are weak. Over time this can have a serious impact on girls' self esteems. One study published in the journal Psychology of Sport and Exercise, actually found that if you tell girls that "girls are bad" at a certain task, they will be bad at it. Imagine what we could do for girls' self confidence, if we encouraged them instead?

I hope we all agree that we need to start changing the way we talk to, about, and in front of our kids about gender and gender roles.

From the time they are born, our culture sends subtle and not-so-subtle messages about our kids' places in the world. I hope we all agree that we need to start changing the way we talk to, about, and in front of our kids about gender and gender roles. Because, maybe if we raise our sons to see their dads cooking and changing diapers, more men will take a larger role in parenting. And if we teach our daughters they're more than just pretty faces and that they can raise hell once in a while, more women will become CEOs, and scientists, or we will see a female president in the White House. The possibilities are limitless when we discard the limits of gender stereotypes, and we have to start somewhere.