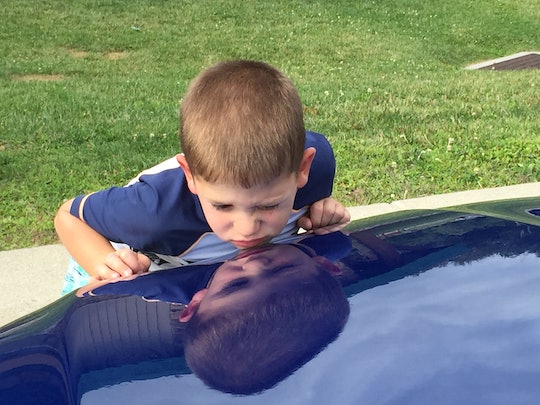 I’m a sensitive person who feels all the things, but keeps those feels hidden. My kids, on the other hand, wear their emotions flagrantly on their sleeves. While I love how free they are in showing their unconditional love for me, especially since I never felt affectionate towards my own parents, I definitely do not love how they unleash their more prickly emotions. But after nine years of parenting, I realized there is one thing I can do for my kids when they’re angry that helps them, and me, deal with their feelings. Like love, anger is a legitimate emotion, and they should be allowed to feel it.

When I was younger, I was not encouraged to show my emotions, especially the thorny ones. “Don’t get mad, get even,” was my mother’s mantra. I lived with the idea that even recognizing anger was wrong and, instead, I should chase it away because it wasn't justified. That doesn’t work, though, and I struggled to swallow my feelings. In fact, I'm convinced a kidney infection I endured in my 20s got as bad as it did because I was holding in feelings and refusing to express them. They festered, I stayed silent, and as a result I got sick. It wasn't until I became a mom, and had to weather my children’s storms of anger, sadness, and all the usual feelings that come with being a sentient human, did I realize I could never tell my kids to stifle their emotions the way I was forced to. Doing so only added fuel to the fire. Telling them to “calm down” only made it more challenging for my kids to work through their feelings, because they were essentially being told they weren’t allowed to even have them.

So the one thing I’m working on doing to help my kids when they are angry, is allowing them to be angry.

Now, I have not perfected the practice of assuring my kids it’s OK for them to feel what they are feeling. When my kids are angry, they’re usually going to yell or try to hit their siblings or call one of their parents “stupid” or even dare us to “shut up," and that makes me angry. For example, I really failed the other day at breakfast. It’s bad enough that we don’t have the luxury of time on a school day, and have to keep our kids on schedule so they can eat and brush their teeth and all that other stuff before we dash off to make the 7:30 a.m. bus.

Telling them to “calm down” only made it more challenging for my kids to work through their feelings, because they were essentially being told they weren’t allowed to even have them.

On this particular day I was flying solo, as my husband was away for work. So there was no adult able to sit with my 9 and 6 year old old at the dining room table while they had breakfast. I was back and forth from the kitchen, packing up their lunches, making my coffee, and getting myself dressed (despite having woken up 15 minutes earlier than usual to deal with the entirety of the morning routine in my partner’s absence). I didn’t have my eyes on my kids, and grumpy from the early hour and the looming fate of trucking off to school, they spontaneously erupted into shrill volley of escalating accusations. “He called me an S.B.!” (I still don’t know what this means.) “She kicked me!” They got loud fast, and were out of their seats, pummeling each other.

I called out sharply for them to stop it.

Again, I demanded they cut it out.

Instead my daughter devolved into incoherent whines, banging the underside of the table, while my son kept throwing his sister’s name out in defense: “She did this! She yelled that! I didn't do this! She did that!"

I was smack dab in the middle of tornado of anger at 6:45 a.m. and there was no amount of deep breaths I could take in order to walk back my own rage.

In one of the most ineffectual parenting moves I’ve made, I attempted to quiet their feud by overcoming their anger with my own. I yelled “Shut up!" and repeated it, in their faces, my spit just missing their mini bagels. Again. And again. And again.

I am an adult, so I know how to calm myself down. My children are still learning to do that, so I can’t demand they just stop being angry.

I could not have been presented with a more obvious example of how my behavior influences that of my children. It was so ugly, and I feel so much shame for that episode of unabashed rage and exhaustion. This is a hard one to chalk up to “just another parenting fail," to be sure, but it has taught me the one thing I can do for my kid when they’re angry, and it is not to add fuel to their fire. Instead, I have to give them permission to feel their emotion, and provide a safe space to do so.

When I lashed out in anger I didn’t allow myself any space. I didn’t excuse myself to the bathroom to just have a few minutes to feel my feelings, without directing them at my children. I am an adult, so I know how to calm myself down. My children are still learning to do that, so I can’t demand they just stop being angry. I can, however, show them how to live with, and work through, that anger without it hurting anyone.

I will not deny my children their right to feel all the things they need to.

Anger has been a useful tool to me at times. It’s helped me speak up in meetings when others dare to take credit away from me, and has enabled me to advocate for my children with the school’s administration after a bullying incident. It has also demonstrated to others that they are not entitled to the nicest sides to me when they don’t treat me with respect.

I will not deny my children their right to feel all the things they need to. I want them to feel anger as much as I want them to display love and compassion. They have to know anger to recognize it in others, and to realize that the emotion can be separate from action. You can feel anger, but you can’t hit or use hateful words. You can show the world you’re angry, sure, but don’t let it turn you into a person you will regret being.

As my kids get older, I hope they will naturally develop better coping mechanisms than whining and screaming and throwing tantrums. The only way they’ll get there, though, is if we recognize their feelings — all their feelings. “It’s OK to feel angry,” I tell them know, and I can see some relief under their furrowed brows. Just having their feeling justified takes the burden off them automatically “snapping out of it” and just all of a sudden feeling better. You can’t “calm down” by sheer will. You need to be guided, and after that awful “shut up” episode at my breakfast table, my resolve is stronger than ever. I will help my children navigate the scary feeling of anger. I am confident we will get there, if their open displays of love for their friends, their teachers, and their family is any indication that they know the important role emotions play in our lives.

You can show the world you’re angry, sure, but don’t let it turn you into a person you will regret being.

I won’t stop getting angry, so I can’t expect my children to either. By recognizing their feelings, and, most importantly, demonstrating how to safely work through them, I’m showing them how to be in touch with their emotions, and I’d like to believe the world will be a better place for that.