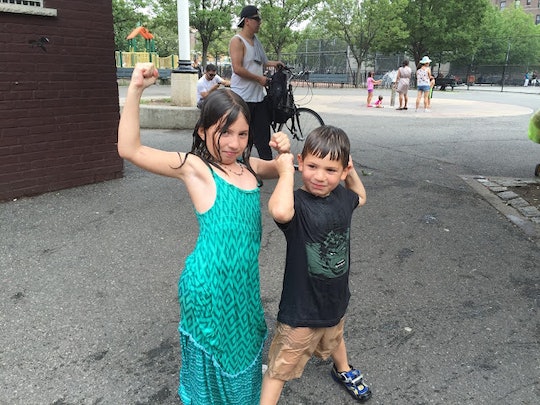 Our kids' appearance is (arguably) the first thing we remark on when they're born. What else is there to say? The kid doesn’t have much of a personality and hasn’t had enough time to cultivate a taste in music or literature and can't articulate how smart they are. If babies were aware of all the compliments they receive regarding their looks, their already-big heads would be, well, even bigger. It's probably a good thing they remain blissfully ignorant for the first couple of years of their lives, before it becomes necessary to teach kids about their appearance so they can be body positive. And trust me, it will definitely become a necessity.

My daughter was not quite two years old when she developed an intense focus on her appearance. I’ve been letting her dress herself since she was a toddler and, perhaps, that choice has cultivated her rather strong opinions regarding what she should wear (and what I should wear, like, why am I not strapping myself into stilettos every day?). I learned to give her free reign over her wardrobe choices (making sure to eliminate anything not climate-appropriate) and the result is a self-assured toddler who dresses herself, no problem.

Did I teach her how to perfectly match, or rather, clash patterns to create her own signature look? No. I can’t take credit for her style, nor can I take credit for her style critiques, of which there are many. She's cultivated her own look and her own feelings about said look, and I can only stand back and be proud, while simultaneously re-evaluating all of my fashion choices.

I may have taught my daughter to be steadfast and unapologetic about her appearance, but I think I've also taught her something that will serve her well in the future and especially as she matures and becomes aware of the judgment society loves to pass on our bodies (especially women's bodies).

In an effort to make our children body positive while they navigate their way through growth and development (and under the scrutiny of the world determined to overexpose us all through the lens of social media), every parent and caregiver needs (or should) take an important first step. A step that, to my surprise, has absolutely nothing to do with looks or outward appearances.

The first thing you should teach your kid about their appearance is that how they look, pales in comparison to how they feel.

I went on my first diet when I was eight years old. It lasted less than a day, but the fact that I was even trying to change something about my body's appearance at such a young age is heartbreaking, and definitely something I don't want my own children to experience. Still, as a chubby third grader, I wanted to lose weight and my overall goal wasn't to feel great, but to look thin. I already knew that the preferred body type didn’t include a paunchy belly or thick thighs, physical qualities I had. I didn’t come to this conclusion because I played with dolls whose figures represented an unattainable figure, as those were mere toys, meant to be agents of imagination and fantasy. No, I learned about this body type by way of television and the rules of my house because, with both, thin was "in." Thin actors and actresses ruled the airwaves and my meal portions were policed; sweets were to be earned by eating our vegetables. As I grew into my body, I also grew into an unhealthy relationship with food.

Subsequently, my relationship with my own body was fraught with frustration and disappointment. I thought my life would be better if there wasn’t so much of me to carry me through it and if shame didn’t close in when I hankered for another cookie and if clandestine measures to sneak said cookie weren’t met with belittling verbal reprimands.

I wonder if I would have had more love for my looks if didn’t feel like I was constantly falling short of some unrealistic and unhealthy standard that randomly (or not so randomly) became the benchmark for beauty. That’s why now, as a mom, I’m really making an effort to give my kids' the body confidence I've been working my entire life to obtain, and it all starts with something I first had to teach myself: that my happiness didn’t have to be contingent on my jeans size.

The first thing I’ve tried to teach my kids about their appearance, to make them more body positive, has been to focus on feelings. Not health. Not beauty. Not size. Not food. Feelings.

That means I have to model this behavior. It means I can't allow myself to get exasperated with my reflection if I don’t like how my outfit is fitting, because I know my children are constantly watching. I don’t add any commentary when they play on the scale and ask me to get on and revel at the number, because I know they're listening. I definitely don’t deny them dessert as a sweet way to end a mostly nutritionally balanced meal, because I know they're really just eating.

As a mom recovering from soul-sucking, time-wasting body image issues, I’ve been vigilant in my efforts to keep my own kids from developing the same problems. I don’t compliment them on their height, weight or breadth. Recently, when my 8-year-old daughter was recovering from a violent stomach bug that kept her from eating for days, my mother remarked that we’d need to “fatten her up.” Oh, hell no. While she did need to build her strength back up, that didn’t give someone the right to criticize the kid’s weight or associate a certain weight with a certain strength or ability. I’m sure my mother’s intention was pure, as she really just wanted to see her granddaughter get her appetite back. Still, as someone who was told they needed to slim down (from both doctors and family members), I recoiled at the idea that we needed to do anything for my daughter’s body to reach some kind of aesthetic goal that can only be measured by outward appearance or a number on a scale.

Maybe if we focus on the way exercise makes us feel, or how eating good food with good people makes us feel, we chip away at society’s insistence that we focus on how these things make us look. Our appearance is outward, for others to embrace and criticize and admire or, you know, not. Our feelings, on the other hand, are just for us and us alone and that makes them far more important and valuable and worthwhile than our outward appearance and what others may think about it. I can think of a million things that make my kids happy that have nothing to do with how they look, and that's a power I'm trying to teach them to hold onto, especially when they start realizing that others (for better or worse) will eventually "care" about how they look.

More Like This
Ashley Graham On The “Fun, Organized Chaos” Of Raising Twins
These Stepmother's Day Instagram Captions Are Straight From The Heart
Stepmom Quotes & Sayings For Every Occasion
What Is Monkeypox & Should You Be Worried? Here’s What You Need To Know