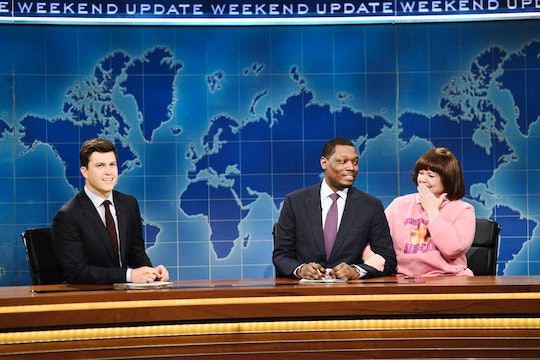 There's really never enough Saturday Night Live in our lives, which is why it's a total bummer that Season 43 is coming to an end this week. Luckily, it's the kind of show that likely won't be canceled in our lifetime. So when does SNL Season 44 premiere to bring us more Stormy Daniels sketches and Donald Trump impersonations?

As of now, there's currently no official premiere date for the fall return of Saturday Night Live. But it's a later fall premiere date, usually, if past season debuts are any indication. Last year, for example, Season 43 premiered on Sept. 30, 2017, which means you're going to have to wait way past Labor Day to get your Weekend Update fix. That premiere date is pretty standard — Season 41's premiere, which was hosted by Miley Cyrus, didn't air until Oct. 3, 2015, just to give you some reference. So Season 44 could premiere anytime in late September or early October.

Last summer, NBC launched a spinoff of SNL, titled Weekend Update: Summer Edition, which aired on Thursday nights throughout August and September. Hosted by Michael Che and Colin Jost, it was a half-hour show of just Weekend Update, with other cast members making cameos now and again. NBC hasn't announced whether the series will be picked up for another season, but given the network's late summer programming, it's likely they'll find a way to fit it in. Jost and Che are pretty popular, and they're hosting the 2018 Emmys, so it makes sense to give them as much airtime as possible to practice their schtick.

SNL seasons ebb and flow in terms of how popular they are, but overall this one was a slam dunk. Then again, the writers did have a lot of fodder to work with, considering the current socio-political climate. Alec Baldwin returned to impersonate Donald Trump, Kate McKinnon ruled as Jeff Sessions (and Betsy DeVos, among other characters), and Stormy Daniels even made an IRL appearance earlier this month.

But it wasn't just politics that inspired the comedians, either. There was a hilarious This Is Us parody this spring and a take on It that turned Kellyanne Conway into the iconic killer clown. JAY-Z opened up the season as a musical guest, doing songs from his 4:44 album, and Childish Gambino went viral after premiering his song "This Is America" in early May. So yeah, you could say it was a memorable year. The show won nine Emmys out of its 20 nominations last year, so it's definitely on a good run.

For the finale, Tina Fey returns to 30 Rock along with musical guest Nicki Minaj. In a promo for her appearance, the show animated Fey for a trip down memory lane. She said in the video, “I first got hired at SNL as a writer, then head writer. I had successfully mastered the art of sleeping with my eyes open. Then, I got to be a cast member!”

In her characteristic self-deprecatory way, Fey goes on to joke in the cartoon that after leaving SNL she's done "other stuff," like write a handful of successful books and movies, including the Mean Girls movie and Broadway musical which is up for 12 Tony awards. Fey concluded in the promo, "Now I’m back at 30 Rock, and I couldn’t be more excited.” So the season is really closing out on a high note.

Currently, Che and Jost are the head writers for SNL, as of December 2017. They joined other head writers Kent Sublette and Bryan Tucker, along with writing supervisors Sudi Green and Fran Gillespie. Only Green and Gillespie are women, so there could always be more diversity in the SNL writers' room. Maybe, come Season 44, Lorne Michael will make that happen. We'll have to wait for the premiere and see.