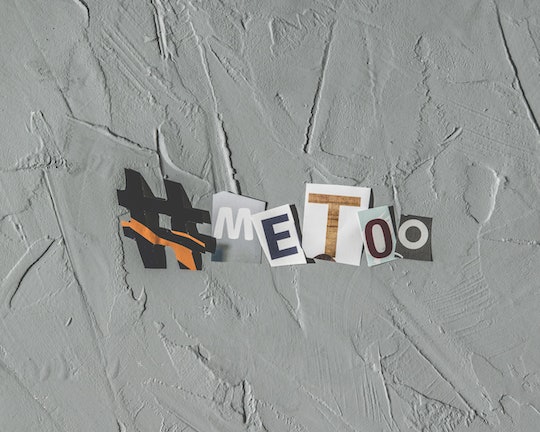 “I have to tell you a secret,” he says from across the monkey bars.

He trots over, leans in close to my cheek… and kisses me.

He looks a little surprised, but he rolls with it. I’m annoyed, but we get back to playing, and by the time his mom has picked him up after dinner, I’ve moved on.

He was one of many boys who touched me without consent when I was a child. The fact that they were taught to keep their hands to themselves didn't matter. It wasn't enough. These were not “bad” boys, either. They were pretty good students, polite to parents, and mostly just got into trouble for burping the alphabet. But they also pulled hair, snapped bras, and scooped handfuls of their female classmates' asses as they ran back to their friends to boast how they “touched it!”

Three decades ago, these boys would get chastised with the standard “keep your hands to yourself” line from faculty and staff. Some parents might have reprimanded them at home, while others chose to use the classic explanation of “boys will be boys" excuse and remind young women like me that, hey, this means someone actually liked us.

It was, simply, the way it was, and I was often reminded that as girls we were "lucky" we didn't have it worse. I was living in New York City in the '80s and '90s, so I was constantly told that choosing to walk around our Queens neighborhood by ourselves meant knowing to keep our keys in our fingers, and our “subway” faces on: a scowl meant to thwart strangers from messing with us.

I'm not sure if the "subway" faces helped. I was asked a lot by passersby to smile.

Now that I have children roughly the same age I was when a boy kissed me without my permission, I'm worried. I don’t see a vast improvement of behavior from boys, especially if it's based on what I’ve been witnessing on the playground these last 10 years. However, I have started to notice a shift in society’s reaction to unwanted touching, at any age. There’s this story about a mom’s fantastic reaction to her daughter’s school faculty, after the girl punched the boy who snapped her bra. The Department of Education in New York City goes to great lengths to make our community understand there is no place for bullying in our schools. Kids have to sign contracts, and suffer warnings and more dire circumstances if they're caught bullying another student. Of course, the operative word is “caught,” which means the victim, or a witness unafraid of siding against a bully, must report it.

It was, simply, the way it was, and I was often reminded that girls like me were "lucky" we didn't have it worse.

I’m glad the tolerance for that kind of behavior has decreased, but, like most parents, I wish for a world where it wasn’t even an option for kids to harass others. Whether it’s through lewd comments, unwanted touches, or slanderous graffiti scribbled in the bathroom stalls, no one, let alone a child, should be a victim of this kind of harassment.

That is why, every morning before she leaves for school, I drill into my 10-year-old daughter’s head that she is not to let anyone touch her, no matter how fuzzy her sweater is, without her complicit consent. She, and she alone, decides what happens to her body.

I know that kids are all taught to keep their hands to themselves, and they don’t. My children were toddlers and had to learn that we don’t hit. They had to learn they can’t snatch toys away from others, and that they can’t run up to other tots on the playground and smooch them, no matter how cute this display of affection seems to us, their parents. My partner and I, as caregivers tasked with raising kind, empathetic, respectful human beings, tell our kids these things, we refrain from corporal punishment to prove our “no hitting” stance, and we want to believe we are modeling respect for others. But as parents we both know we can’t do it alone. It takes a village, and I need my village to do more than simply ask their children to keep their hands to themselves.

Growing up in New York, personal space was rarely an option. I shared a room with my younger brother until I was in my teens. There were about 35 students in my classes until I got to college. I’ve been commuting on jam-packed subways in the crush of rush hour for almost 20 years. It’s no surprise that I really don’t like being touched. Having kids often exacerbates my aversion to physical contact, too. I still feel touched out, years past my extended periods of breastfeeding. My 7-year-old son thinks sitting next to me is too great a distance. Instead, he wants to be on me when I read to him. My daughter still asks for piggyback rides to the breakfast table, and as working mom who sees them for about two hours a day, I have a hard time turning her down.

It takes a village, and I need my village to do more than simply ask their children to keep their hands to themselves.

But I do have to turn my kids down, sometimes. “Give me some space, please,” I tell them, especially when they cruise into the bathroom to chat while I’m peeing, or they just stand so damn close to me. The idea that we don’t have to be in such close contact is practically foreign to them.

I have to be firm about my personal space. My children have been hearing “keep your hands to yourself” for years, but the declaration is still relevant. And with all these stories of men in media, politics, and tech abusing the privilege of their power to dominate and sexually harass women in the workplace (and really everywhere), it’s become abundantly clear that “keep your hands to yourself” simply isn’t enough.

What lesson could these perpetrators of systemic sexual assault and violence — and all the others we don't know about... yet — have learned to have made them realize they are not allowed to make anyone feel less than them? That they are not allowed to leverage their social or professional status for personal pleasure? That their personal pleasures are never allowed to come at someone else’s expense? Because, clearly, "keeping their hands to themselves" as a lesson that failed to stick.

In a desperate attempt to make sure my children know they are not to touch anyone without consent, and that they need to overtly claim their own personal space to others who attempt to infringe upon it, I have found myself asking if I can hug them.

I started with “keep your hands to yourself,” but I must keep going further.

That bears repeating: in my attempt to model consent for my son and daughter, I ask their permission to hug them. And honestly, what choice do I have? Words clearly only go so far, so we, as parents, need to lead by example.

I started with “keep your hands to yourself,” but I must keep going further. I want my children to feel safe, and for others to feel safe around them. But I'm afraid we can never achieve that safety until the fundamentals of equality and respect are practiced by all of us. When a teacher ridiculed me for my style of dressing, and a supervisor commented luridly about the length of my skirt at a holiday party, it undermined everything I had ever achieved in the classroom and the office. It made me not want to get noticed, ever, for good or bad things. It made me want to disappear.

Too many women are disappearing because of the threat men in power are proving to be. For the next generation of leaders — my kids’ generation — we have to give them the right tools. My focus with my kids right now is on empathy and respect. I don’t know the outcome yet, but since we’ve learned “keep your hands to yourself” is not a strong enough directive, I’m hoping we can evolve our parenting skills to change our culture, and eliminate sexual harassment for good.