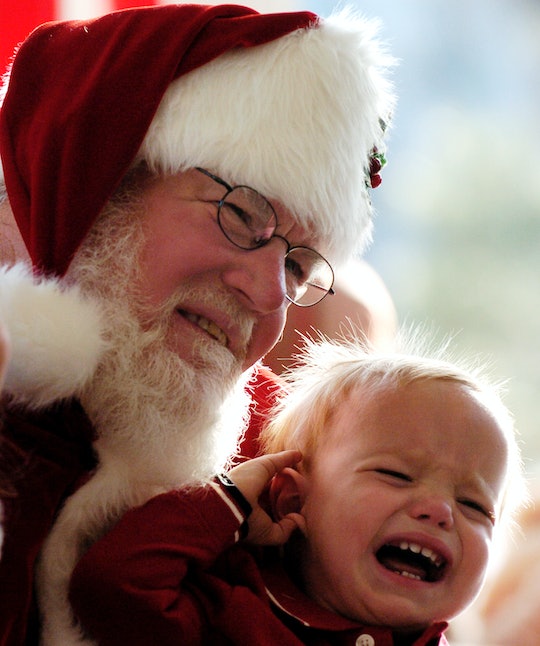 How To Explain Who Santa Is To Your Kids Without Lying

The Santa Claus years, when children are caught up in the magic of Christmas, can be some of the sweetest periods in a family’s life. But with those tender years comes the nagging reminder that one day your child might look up at you and ask, “Is Santa really real?” What’s a parent to say? Tell them the truth and they might be heartbroken. Fib and risk the loss of their trust when they realize you lied. Is it possible to find a way to explain Santa without lying?

How To Explain Santa Without Lying

First things first, you can absolutely avoid lying by sticking to the facts. It is a fact that there was a real life Saint Nicholas. History is your friend in this endeavor. You can use author Julie Stiegemeyer’s children’s book “Saint Nicholas: The Real Story of the Christmas Legend” to help kids learn about the 4th century Bishop of Myra and the miracles he allegedly performed that eventually inspired the man we know as Santa today.

You can even use this as a jumping off point to explain how children loved these stories so much that the character eventually evolved into Saint Nick, a bringer of gifts each December 25.

Saint Nicholas was born in what was then Greece in the third century, according to the Saint Nicholas Center. He was born to wealthy Christian wealthy parents who died when Nicholas was young. But the story goes that the writings and teachings of Jesus had already taken root in the young man and in an effort to follow Jesus’ words to “sell what you own and give the money to the poor,” the man gave up his inheritance to the needy and sick. He eventually became a Bishop and was known for his incredible generosity. But that same conviction to serve the needy would ultimately lead to his persecution. Under the Roman Emperor Diocletian, Nicholas was imprisoned. After his release, he died on December 6, AD 343 in Myra.

But his legend lived on, namely as a protector of children.

If you’re wondering how we got from an ancient Saint to a bearded “elf”, consider this story of Saint Nicholas. Allegedly a poor man had three daughters in Myra who were doomed to never marry due to them not having a dowry. Their fate was sealed to become slaves if they could not be married off. But “on three different occasions, a bag of gold appeared in their home-providing the needed dowries. The bags of gold, tossed through an open window, are said to have landed in stockings or shoes left before the fire to dry,” per the Saint Nicholas Center. And thus a tradition of hanging stockings was born.

Clearly, the concept of Saint Nick has evolved, but it’s rooted in the good works of a man who lived hundreds of years ago.

How To Tell The Truth About Santa

Worry less about lying and focus more on discerning what your child is actually asking you, advises Dr. Robin Gurwitch, a faculty member in the Duke University Department of Psychiatry and Behavioral Sciences and the Center for Child and Family Health.

“Reflect the question back to them,” says Dr. Gurwitch. “You can say, ‘What do you think?’” In this way you’ll be better able to gauge what your child is really after. Perhaps they’ve just heard other kids on the playground discussing Santa and they’re not really after the truth. But if their intent is get to the heart of the matter, well then, be honest.

“You can say to them, ‘I will never lie to you. Do you want to know the truth?’” says Dr. Gurwitch. This gives your child a moment to consider what they’re asking.

Consider their age as well when approaching the delicate topic of the unveiling of Kris Kringle. In 2020, House Method published a survey of 4,500 Americans and asked them if they ever believed in Santa and if so, at what age did they stop believing. They broke down the results by state. The average age kids stopped believing? 8½. The youngest unbelievers were in Oregon where kids stopped believing at age 7.4, while Mississippians held on the longest at age 10.2.

How To Cushion The Blow Of Revealing Santa As Not Real

Of course, you know your child best and will be able to gage their understanding. If and when you rip the bandaid off the truth about the Jolly Old Elf, Dr. Gurwitch has some great advice for how to proceed.

“Let your child become part of the grownup secret,” says Dr. Gurwitch. Rather than simply find out an unhappy truth, discovering Santa is actually mom and dad means that big brother or sister can now be in on the fun. “They can help fill the stockings or write the Santa cards for their younger siblings or help keep the magic alive for younger friends and family members,” she says.

You can also reassure kids that they’ll still get special presents even if they know the Santa scoop. In fact, those presents might even say “from Santa” in order to help keep the fun of Christmas alive for their siblings.

“I read this one anonymous story online that I love,” says Dr. Gurwitch. In it, a mom is faced with her child realizing Santa isn’t real. “So she tells him, You’ve grown up so much this year that your heart has grown too, which means it’s time you get to become Santa.” What does that mean? In this story, Dr. Gurwitch says, it means a child gets to pick someone in their community to give a gift to without any expectation of thanks or a gift in return. This new secret mission actually helps to further a child’s understanding of the true meaning of the holiday, to embrace unselfish giving with acts of kindness. In short, it takes what could be a sad moment into a fun new adventure.

Ultimately, how you approach the Santa question is up to each individual, but one thing to consider well before that day comes: discuss how you want to address it not just with your partner but also your extended family including grandparents or aunts and uncles. Then when the time comes, everyone can be on the same page and make the transition easier for children. Remember, you how to explain Santa without lying doesn’t have to be a fraught experience. It can even be an exciting one if you are transparent, honest, and turn it into an uplifting new holiday adventure.

More Like This
34 Instagram Captions Perfect For Preschool Graduation Photos
From Captions To Gifts, These Are All The Kindergarten Graduation Ideas You Need
Fun Ways To Celebrate National School Nurse Day
26 Toddler Lunch Ideas They’ll Actually Be Excited To Eat