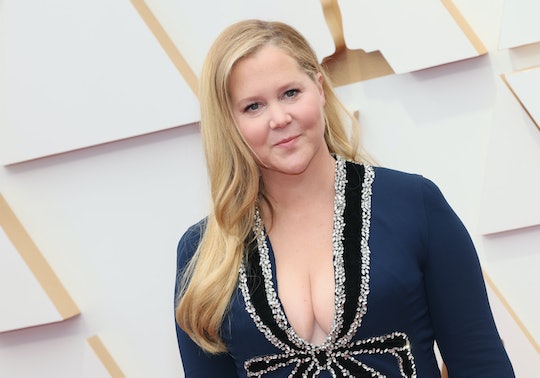 “I have seen Encanto so many times.”

Amy Schumer is undeniably a Cool Mom. She just hosted one of the most talked-about Oscars ceremonies of all time, she’s back on tour with a new comedy show called “Whore Tour,” and she wrote and starred in Life & Beth, a new Hulu series that’s garnered great reviews. But what gives Amy Schumer “cool parent” status in her eyes? Watching Encanto “so many times” with her 2 year-old son, Gene.

In a hilarious video for Vanity Fair, Schumer, carefully strapped to a lie detector machine, dished on her celebrity crush (Christian Bale), favorite Kardashian (sorry Khloé and Kourt, it’s Kim), and long lost memories of John Cena’s butt. She also fielded questions on a subject closer to her comedic heart — parenthood and her adorable son Gene, whom she welcomed with husband and chef, Chris Fischer, in May 2019.

Schumer is known for sharing tons of updates about little Gene. Recently, she revealed it’s Gene who calls the shots when it comes to what’s funny in their family. And, presumably, that includes Disney’s hit movie, Encanto.

During her lie detector sit-down with Vanity Fair, Schumer was asked if she considers herself a cool parent and she, very seriously, answered “yeah.” Why? Because she’s seen Encanto more times than she can probably count.

“I have seen Encanto so many times, and I love it,” Schumer explained. “And my son and I listen to, what he calls ‘the strong song,” a lot, which is actually titled ‘Surface Pressure.’”

But when the interviewer pressed Schumer for more: “So cool parents are watching Encanto?”, she broke character and released a muffled laugh.

While most of us are still reeling from a collective “We Don’t Talk About Bruno” obsession, “Surface Break” is also a hit worth celebrating. The song is sung by the Encanto character, Luisa Madrigal, a sister with superpowers, who is strong and self-assured on the outside, but admits to the huge pressures and expectations placed on her, especially as the older sister.

Like Luisa, Schumer exudes confidence, but has also spoken candidly about deep vulnerabilities. From being extremely open about her fertility struggles and battle with endometriosis to admitting to recent liposuction, Schumer keeps it real with her fans. So maybe it’s actually no joke that belting out Lin-Manual Miranda’s lyrics makes Amy Schumer an even more awesome parent. Grab your kid, sing along, and don’t be surprised if you suddenly feel your mom coolness skyrocketing.