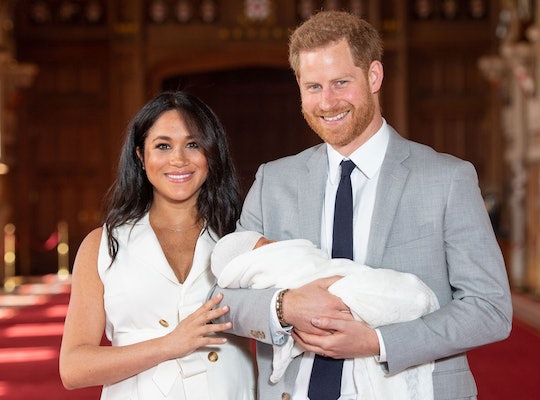 Master Archie could have been Master Harrison.

When Meghan Markle gave birth to her first child with Prince Harry in May 2019, the world waited with baited breath to hear what his name would be. Bookmakers across the United Kingdom were taking bets. Arthur was the top choice for a boy, Diana for a girl. They all got it wrong. The Duke and Duchess of Sussex went for a seriously distinctive name for their first child that defied some of the more traditional royal names of the past. But that doesn’t mean Archie Harrison Mountbatten-Windsor’s name wasn’t steeped with deeply personal meaning for the proud parents. Quite the opposite, in fact. Here’s everything you need to know.

During a visit to the Hague in the Netherlands to support the Invictus Games athletes in April 2022, Meghan admitted that she and her husband weren’t sure if Archie was their final choice. Meghan was chatting with Royal Air Force competitor Sherry McBain’s wife Mandy, McBain told PA, when Mandy mentioned her son’s name was Harrison.

“[Meghan] was like 'Harrison, that's Archie's middle name', and Mandy was like 'Yeah, I know,’” McBain told PA. “They were just having a chat because Harry and Meghan couldn't decide between Archie and Harrison for the first name.”

In the end, the couple’s choice felt so iconic it’s difficult to imagine their son with any other name. But it did almost happen.

The meaning behind the name Archie is powerful.

The Duke and Duchess of Sussex’s choice of Archie for their son’s first name might not have been an obvious one, but it actually does make sense. The meaning behind the name Archie is “brave,” and little did the couple know in those early days how important bravery would actually become to their small family. Not long after he was born, his parents stepped away from their senior royal roles and moved their lives to California. That’s a whole lot to take on for a very little boy whose name also means “tough, tenacious, bold, and powerful.”

Archie (kinda) shares a name with his cousin Prince George.

When Archie was born, he actually inadvertently stole Prince George’s own nickname for himself. At the time, the future King of England liked to call himself Archie, or so he told a woman walking her dog outside Buckingham Palace in 2019 when he insisted “I’m called Archie,” so the two cousins may just have to duke it out for the name.

But he has a different last name than his cousins.

Archie’s last name is not Sussex, despite the fact that his parents are the Duke and Duchess of Sussex. Instead, he has the last name Mountbatten-Windsor, which is a name Queen Elizabeth and Prince Philip chose for their descendants in 1960. Prior to that, the royal name was Windsor, but the Duke of Edinburgh’s own last name of Mountbatten was added at that time.

And although they are related through royal blood, Prince George, Princess Charlotte, and Prince Louis all share the last name Cambridge, as their father’s ducal title is Cambridge. As Prince William and Prince Harry used the last name of Wales when they were in school (Prince Charles has held the title for Prince of Wales), royal expert Marlene Koenig explained to Town & Country that Prince William and Kate Middleton’s children use “Cambridge as a surname at school.”

Harry and Meghan’s children, Archie and daughter Lilibet, however, use the royal family name Mountbatten-Windsor as their surname because they do not carry HRH titles, like their cousins do.

Archie does not have a royal title.

While Archie’s Cambridge cousins all have the royal title of either prince or princess, Archie does not. Instead he is officially “Master” Archie Harrison Mountbatten-Windsor, due to royal protocol as he is not in the direct line of succession. His parents, however, told Oprah Winfrey in a 2021 interview that this went against protocol and they wanted him to have a title since he would be afforded extra protection along with it, but that request was denied. “They didn’t want him to be a prince or a princess, which would be different from protocol,” Meghan told Winfrey. “It was really hard.…This went on for the last few months of our pregnancy where I’m going, 'Hold on a second. How does that work? … If he’s not gonna be a prince, he needs to be safe.’”

After the explosive interview, a palace source told Us Weekly the decision was indeed due to protocol. “Under royal protocol established by King George V, only those in the direct line of succession to the throne get the titles [of] prince or princess,” the source explained. “Archie would’ve been given a title when Prince Charles became king.”

But he is his dad’s little namesake.

Archie’s first name might not have been given in honor of a family member, but his middle name, Harrison, literally means “son of Harry.”

Archie is named for his dad.

Prince Harry’s full name is actually Henry Charles Albert David, but he is known the world over as Harry. Therefore Archie’s middle name is quite literally son of Harry. And for a man who so totally loves being Archie’s dad, to the point that he carries a briefcase engraved with “Archie’s Papa” on it, how wonderful is that?

Archie has a cute nickname.

In 2020, Meghan read Duck! Rabbit! to 1-year-old Archie for Save the Children and was heard calling her little boy “Arch.” So even though Archie already kind of sounds like a nickname, he got a nickname for his nickname.

Archie’s last names are in honor of his great-grandfather.

Meghan and Harry managed to find a perfect blend of tradition and originality with Archie’s name. It will be interesting to see what the brave little boy does with his future.

This article was originally published on Feb. 26, 2022