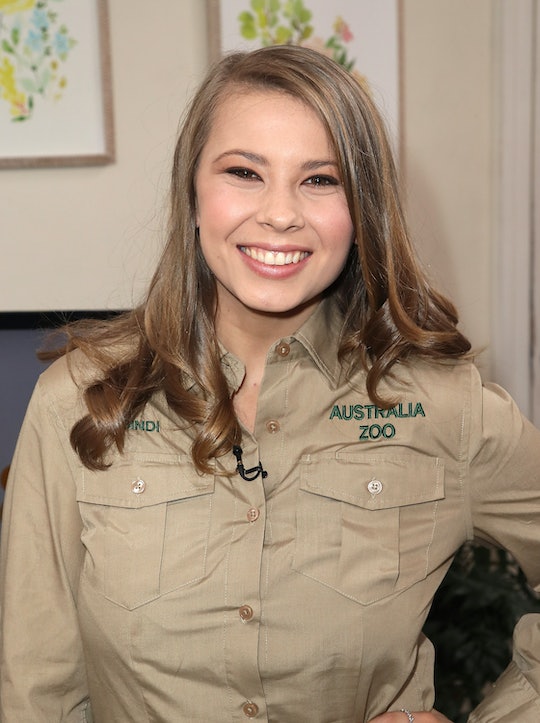 "Baby Wildlife Warrior is already so loved and we are eternally grateful."

“Baby Wildlife Warrior” is finally here! Over the past few months, Bindi Irwin has documented her pregnancy with photos and sweet updates on social media. And on March 26, Bindi Irwin announced she gave birth to her daughter and gave her a beautiful, meaningful name.

Irwin and her husband Chandler Powell have been actively keeping their fans and followers updated on Instagram since they first announced their big news in August. Irwin revealed that she was expecting a "baby wildlife warrior" while she was still in her first trimester, noting that she wanted her followers to be a part of the journey "from the beginning." And now their baby girl is finally here.

“Grace Warrior Irwin Powell,” the new mom wrote on Instagram along with a precious family photo. “Our graceful warrior is the most beautiful light.” Little Grace was born on March 25, 2021, which is also her and Powell’s wedding anniversary. “Celebrating the two loves of my life. Happy first wedding anniversary to my sweetheart husband and day of birth to our beautiful daughter,” Irwin wrote on Instagram.

Irwin revealed on Instagram that Grace is a family name. “Grace is named after my great-grandmother, and relatives in Chandler’s family dating back to the 1700s,” she shared. “Her middle names, Warrior Irwin, are a tribute to my dad and his legacy as the most incredible Wildlife Warrior.”

“Her last name is Powell and she already has such a kind soul just like her dad,” she continued. “There are no words to describe the infinite amount of love in our hearts for our sweet baby girl. She chose the perfect day to be born and we feel tremendously blessed.”

Irwin has also been open about how her late father, "Crocodile Hunter" Steve Irwin, is going to be a part of her daughter's life. "He would have been a good, good grandpa. Yeah, he really would have been," she told Entertainment Tonight's Lauren Zima during an interview in February. "I don't think we would have seen our daughter. He would've just whisked her away to the zoo and it would have been perfect. But it is so nice that we'll be able to introduce her to her grandfather through all of the documentaries."

Needless to say, the mom-to-be’s pregnancy updates and birth announcement have been adorable and heartfelt.

Before Irwin made her big announcement, she revealed she was just days, or one week away, from meeting her little one.

Irwin shared this big news in the caption of an Instagram post, where she also revealed that the Australia Zoo has come out with a new line of clothes that fit babies and children. This line, which includes, rompers, bibs, t-shirts, and a “Crocodile Hunter” inspired khaki shirt, is fit for the baby wildlife warrior in your own life.

In a simple, black-and-white snapshot posted to Instagram in March, Irwin only had two things to say about her bump and her husband.

“My world,” she wrote in the caption.

The mom-to-be had been been patiently awaiting the arrival of her Baby Wildlife Warrior, and she isn’t the only one. Her husband, Chandler; mom, Terri Irwin; and brother, Robert Irwin, were so excited to meet her. Irwin shared a photo of them all looking lovingly at her bump, while she rested a hand on her growing belly.

“Waiting for Baby Wildlife Warrior to arrive,” she captioned the photo.

A Reason To Celebrate

In honor of International Women’s Day, Irwin posed with her mom while wearing a shirt that says “I’m A Wildlife Warrior” stretched over baby bump.

“‘Here’s to strong women,’” she captioned the snapshot, featuring the soon-to-be three generations of women in her family. “‘May we know them. May we be them. May we raise them.’”

Irwin shared a look inside her daughter's nursery on Instagram in January. The mom-to-be is taking her daughter's nickname of "baby wildlife warrior" seriously, decorating her nursery with adorable images of wildlife, flowers, and sweet little rabbits.

"Baby Wildlife Warrior is already so loved and we are eternally grateful," Irwin captioned the sweet shot of her nursery.

During her third trimester, Irwin recreated an adorable photo her mom took while pregnant with her brother, Robert, more than 15 years ago.

"Recreating a very special moment," she captioned the sweet shot.

Throughout the entire pregnancy, Powell had been a super supportive father-to-be. "Our little family," Powell commented on a photo, taken of the couple in January. "Baby and I both love you."

Not only has Irwin gotten love and support from her husband, but from her followers, too. "I thought I’d share a bumpdate with you. Thank you for the lovely comments and support on this remarkable journey," she wrote in the caption of her 26-week bump update.

Irwin's mom and brother have been such a strong support system throughout her pregnancy, too. Even if Robert accidentally referred to his sister as "massive" in a February interview with Australia's Sunrise on 7.

Her Daughter, On Camera

Over Thanksgiving weekend, Irwin posted a video from her latest ultrasound appointment, giving fans one of the first glimpses at her little one. "This is so exciting!" Irwin says to the camera. "Look at our daughter! She's so beautiful." Her husband, who took the video, agreed. "Oh my goodness, she is so beautiful," he says from behind the camera.

On Nov. 11, Irwin revealed to her followers that she was officially halfway through her pregnancy, making their daughter about the same size as "a recently hatched emu chick."

This also means her due date would likely be around the end of March.

Irwin revealed on Instagram that she has been loving her maternity jeans with that super comfortable waistband that stretches in the hips and belly. "Now that I know the comforts of maternity jeans, I don't think I'll ever be able to go back," she wrote in the caption of the photo.

Her daughter might also take after her in the style department one day. During a recent appearance on CBS' Sunday Morning, Irwin said that her daughter already has a khaki shirt — like the one she wears to work and the one made famous by her late father. "She has her very own khaki," Irwin said. "Because we always say that khaki is not just a color, it's an attitude."

Even The Animals Are Curious

Fans aren't the only people that are curious about Irwin's pregnancy. The mom-to-be revealed that the animals at the Australia Zoo are interested, too.

Irwin shared that the "animal family is excited" to meet their new addition next year. "Even Forest the giraffe is wondering what's happening!," she added.

Irwin shared her very first pregnancy bump photo, taken by her mom, to Instagram in early October. "Baby girl is doing great," she wrote at the time. "Every time we get an ultrasound she's incredibly energetic and always moving around."

The Moment She Found Out She Was Pregnant

Irwin revealed in September that when she found out she was going to be a mom "time stood still." "I took a test and ran into the kitchen where Chandler was making us tea," she revealed in the caption of an Instagram post.

"I started crying tears of pure joy and told my sweetheart husband that my test was positive," she added. "We were beaming while our adorable puppy Piggy sat on our feet wondering what was going on."

Irwin revealed on Aug. 11 that she was expecting her first child and could not be more excited to share this news with the rest of the world.

"We couldn't wait to share the news as this beautiful little being has become the most important part of our lives," she wrote in the caption of her announcement. "Your support means the world to us. Please let us know your best advice and send good vibes and prayers to our sweetheart. Love and light."

This article was originally published on March 10, 2021