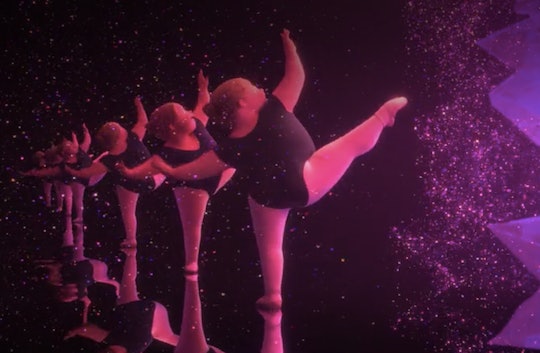 Reflect won’t just inspire you to move your body to the music, it will deeply move you too.

From the force of nature that is Lizzo to the success of Rihanna’s Savage X Fenty, body positivity has definitely penetrated popular culture. And while it’s great for adults to embrace these inclusive messages, it’s equally important for kids to encounter this expanding representation. But cartoons and movies for little ones can sometimes be slow to catch up with the momentum of progressive ideas, like railing against traditional beauty standards. After all, most Disney princesses are known for being rail thin, and it’s only the villainesses who seems to have any substantial meat on their bones. Thankfully Disney has responded with an animated short called Reflect that features a plus-size ballerina, who not only learns to embrace her body, but channels her inner strength and grace too.

The short opens with Bianca, an exuberant dancer in her ballet leotard enjoying the movement of her body before she joins the rest of the class at the barre. “Tight tummy, long neck,” the stick-thin dance teacher says.

When the protagonist looks at herself in the mirror, it splits into neon cracks and opens up into a scary funhouse mirror with multiple reflections. This visual depiction of Bianca’s body dysmorphia is both compelling and emotional. But Bianca is not willing to let her insecurities overtake her. As she reconnects to her body and love of dance, the frightening images and self-doubt fall away and break into a cloud of pink glitter.

Bianca is able to muster up the strength she needs to meet her own reflection in the mirror with both acceptance and confidence. It’s her belief in herself and passion for dance that ultimately dictate how Bianca sees herself.

Director Hilary Bradfield, the animation story artist behind Frozen 2 and Encanto, shared some behind-the-scenes insights in an interview that plays before the short. She explained that the inspiration for the micro-film came when she was confronting her own “body philosophy.”

“I feel like I’m a very body positive person in principle, but when it’s on a personal level it’s a lot harder to be body positive,” said Bradfield.

“When people watch the short I hope they can feel more positively about themselves and how they look and feel okay about the tough parts of the journey. Sometimes you go to the dark place to get to the good place, and that just makes the good place that much more beautiful,” she continued.

Fans of Reflect are definitely connecting with the movie, and it’s taking many back to their own childhoods or bringing up some powerful emotions that reflect how they feel inside.

While it’s a great step for Disney to bring Bianca’s message of self-love out into the world, let’s hope they’re willing to expand these stories of confidence and body acceptance beyond a seven-minute short. The world is ready for a full-length animated feature with a body-positive protagonist. Bring on the plus-sized princess.

You can stream Reflect on Season 2 of Short Circuit on Disney+.

More Like This
Exclusive: 'Firebuds' Dives Into Hanukkah Traditions In Festive New Episode
Surprise Your Kids With This Exclusive Sneak Peek At Mickey Saves Christmas
Brandy Will Play Cinderella Again In The Disney+ Movie The Pocketwatch
Here’s How To Watch 'A Charlie Brown Christmas' This Holiday Season