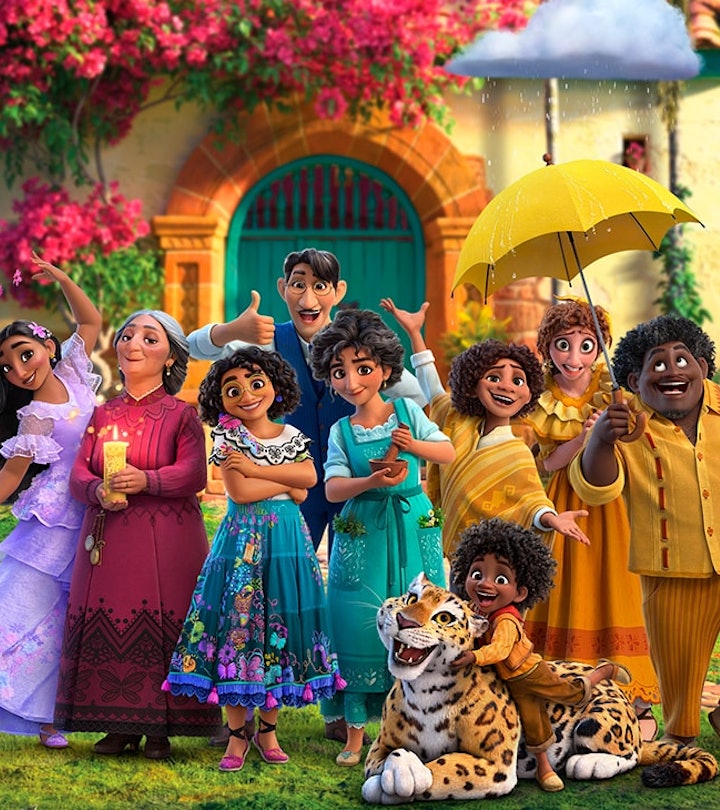 This Halloween will see a lot of children pleading with their parents to get them an Encanto costume. I know this because when I was a little girl, I wanted nothing more than to dress up like a Disney princess. Each year, I would plead with my mother to get me one of those golden Belle dresses from Beauty and the Beast, or maybe an adorable Little Mermaid outfit with the purple shell bra. And each year, my parents would forlornly explain that it wasn’t possible. Not because there was anything controversial about me dressing as a princess, or because they had something against Disney, but because my hard-working parents, try as they might, simply could not afford such things.

The desire to dress up like one’s favorite characters is strong, especially in young children whose worlds often revolve around their most beloved cartoon films. I empathize with this so much. But given the dismal statistics on Latinx representation in film (according to the UCLA Hollywood Diversity Report of 2021, only 5.4% of film leads, 3.2% of film writers, and 2.7% of directors are Latinx), I also acknowledge the reality of how white supremacy shapes our culture. I acknowledge the systemic racism that oppresses Black and brown people like my family and friends. And I acknowledge the xenophobia that exists against people who look like me, or Mirabel, or the one we don’t talk about (ahem, Bruno), that is sometimes even perpetuated by the same people whose children might want to dress up like a member of the Madrigal family. So I’ll admit that when I first began to tackle the question of whether it’s OK for a child — specifically, a non-Latinx child — to dress up as Encanto characters for Halloween, I felt conflicted.

Encanto is a cultural phenomenon, but also just super popular.

There’s no doubt that Encanto as a film is a wonderful example of representation for Latinxs on screen — better than most Disney and Hollywood films, really. The movie was a box office hit, earning a whopping $40.3 million in North America in its first four days, surpassing heavy-hitter House of Gucci in the same weekend. Yes, a film featuring a cast of superb Latinx talent including Stephanie Beatriz, Diane Guerrero, John Leguizamo, and Maluma beat out a movie starring the Lady Gaga and Adam Driver. Encanto also had at least one Latina director and writer, Cuban-American Charise Castro Smith (who also worked on the stellar horror mini series The Haunting of Hill House, FYI).

Then there’s the way in which Encanto’s music became a household staple for families the world over, Latinx and otherwise. The film’s soundtrack featured powerfully catchy songs by Lin-Manuel Miranda and a simply magical score by Germaine Franco — two huge Latinx names in Hollywood. It was the first to keep the number 1 spot on the Billboard 200 charts for nine weeks this year, was nominated for a number of Academy Awards, and won numerous other awards including Film Score of the Year at the ASCAP Awards and Best Original Song at the Satellite Awards. You couldn’t go to a children’s party for months without kiddos all belting out “We Don’t Talk About Bruno,” making it a sure winner among the under-10 set. It’s no wonder, then, that so many children of all backgrounds are scrambling to get an Encanto costume this Halloween.

Encanto was a beautiful representation of a culture that is often shown as “bad guys.” The film gave a voice to Latinx folks from Colombia — a nation that is frequently (and unfairly) pigeonholed in popular media as the land of violent drug cartels a la films like Blow and Miami Vice, and shows like Narcos. And that makes dressing as the characters feel a little different than just any Disney movie.

“How society depicts the Latinx community on screen is directly correlated to how they are treated off the screen as well. The truth remains that Latinx individuals in film are still consistently and negatively portrayed in tropes,” says Brenda Castillo, President and CEO of the National Hispanic Media Coalition. “For every Ariana Debose, there are countless portrayals of Latinx actors as criminals, servants, and the cartel masterminds, and unfortunately it’s still much more likely that those projects and portrayals make it to the screen.

Given the positive depictions of the Colombian Madrigal family in Encanto, you can see that the impact the film has made within our community can’t be overstated.

“Families who have watched films like Encanto have shared on social media how seeing characters that look like them has impacted how their children see themselves — and that’s always the goal,” says Castillo. “While the movie was fictional, the fact remains that many people living in countries like Colombia, where the film is loosely based, come in every skin tone, and the Latinx diaspora is incredibly broad, diverse, and rich with culture.”

So, is it OK for non-Latinx children to dress as members of the Madrigal family?

All that said, is it totally fine for all kids to dress up like the characters from Encanto, simply because we want everyone to embrace our culture in the hopes of reducing hate against Latinxs? The answer isn’t exactly straightforward.

“My 19-year-old college self who was studying the diaspora of Latin American immigrants would have said absolutely not: Non-Latinx parents should not have their children dress up like the Encanto characters for Halloween,” says Cindy Valentín, Operations and Marketing Coordinator at Draw Change, a non-profit that uses art therapy-based programming to empower impoverished children. But Valentín’s perspective has changed over the years.

“Now I feel this is a good thing for non-Latinx folks to embrace our representation,” says the Orlando-based mom. Valentín says she wishes there had been a film like Encanto when she was growing up, one that would inspire her to wear a dress like Mirabel’s that represented her culture. “It warms my heart when I see Latinx and non-Latinx children wearing Mirabel's dress and singing ‘We Don't Talk About Bruno’ in Spanish. In Spanish!”

Valentín says her nonprofit work has made her realize that people need to have emotional connections first before they can educate themselves and eventually become advocates for change.

“What better way to spread our culture, our art, our food, our language than through film, and having every child — Latinx and non-Latinx — become curious about our community, our hopes, and our dreams. I know that's something I never expected to see,” says Valentín.

Stephanie Meyer-Senior, a Colombian-American mom of one (with another on the way) and Operations and Marketing Manager at Archr Design, says she’s OK with anyone dressing as a character as long as it’s clear who they are. But there are some rules.

What families should consider before dressing as Encanto characters for Halloween.

“It’s when lines get crossed that I have an issue. Purposefully darkening skin to look like the character? Hell no,” says the Brisbane, Australia-based mom. “My whole life, whenever I’ve told someone my family is Colombian, I’ve been almost immediately met with a drug or Escobar related ‘joke.’ So sick of only hearing the bad and not the many lovely things that make up an entire country. It’s such a relief to be met with ‘Oh like Encanto! It looks so pretty there!’”

By and large, most people I spoke with felt similarly: dressing up as Encanto characters is OK so long as it’s done respectfully. That is, don’t try to change your or your child’s skin tone, hair, or facial features to try and “match” those of the characters. Focus on the costume, the items of clothing themselves.

“I love to see other ethnicities dressing up as Latino characters. I think it's healthy for them to look up to us every now and then. As long as it's respectful, I'm all for it,” says author and Latina mom Shay Olivarria.

Only a few individuals I spoke with were wholly against dressing up as Encanto characters. And that’s really no surprise. Like I said, Latinxs aren’t a monolith. But unlike the controversy with Disney’s initial Maui costume from Moana, it appears that most Encanto costumes out there are being fairly respectful, and sticking to the articles of the clothing worn by the characters.

“In terms of dressing up like the characters for Halloween, we believe kids should be able to wear the costumes of their favorite characters, as long as they, and their parents, understand the line between celebration and appropriation,” says Castillo. “Families have a responsibility to educate both themselves and their children on cultures that are not their own. They should make sure that any costume is respectful and elevates the film, rather than making it a caricature that can be offensive.”

If your child really wants to dress up like one of the Madrigal clan, make sure they understand that while the Madrigals are a fictional family, their culture is real. Take the opportunity to teach your kids a bit about Colombia, about Latin America, and about Latinx heritage by checking out library books, watching movies and shows and educational videos, learning about Latinx activists, and visiting Latinx spaces in your community. Show them the names and faces of those Latinxs who made the film happen in the first place. If you can purchase your costume from a Latinx vendor, even better.

Additionally, educate yourself and your family about the struggles Latinxs regularly face. From immigration issues like deportations and family separations to xenophobic comments about how we should be speaking English or that we should “go back to our country,” to increased incarceration and police brutality, hate crimes, and more. Our fictional stories are just as important as our actual lived experiences, and they remain important even after Halloween costumes come off. As parents, we can always be the bridge of knowledge to supplement our children’s curiosity about cultures outside their own, and this is just one way to start the process.

More Like This
HelloFresh Is Releasing Spaghetti Meal Kits Inspired By Buddy The Elf
33 A Charlie Brown Christmas Quotes To Fill You With Holiday Nostalgia
All The Nights The Grinch Airs On TV In 2022
How To Watch Elf In 2022, Including A 24-Hour Marathon