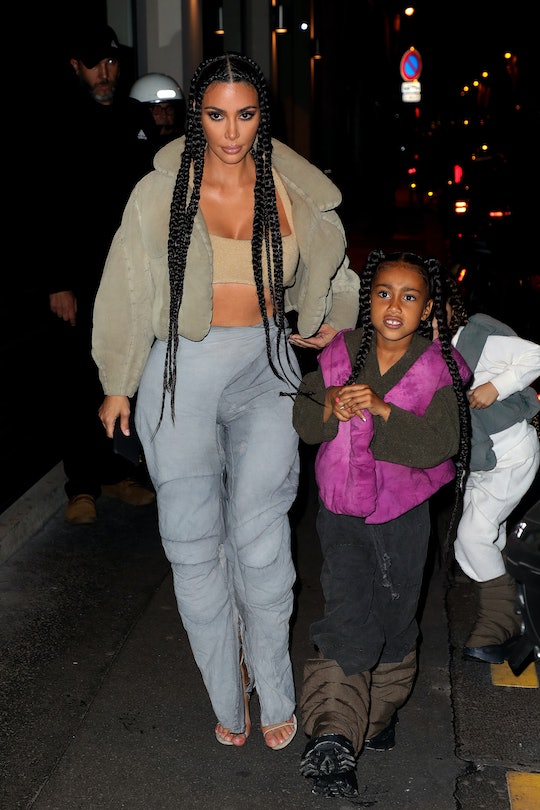 Now that she’s 8 years old, Kim Kardashian’s oldest child is really starting to find her style. Right now, in fact, North West is rocking a “full goth” look, according to her mother.

“North is like, goth — she’s into Hot Topic,” Kardashian said during an appearance on The Ellen Show on Thursday. “She puts fake tattoos on her face and listens to Black Sabbath, and she’s just like, a full goth girl.”

Kardashian’s oldest daughter has tried out a few different styles over the years. For example, the mom of four has documented her oldest daughter refusing to take off her mom’s hot pink snakeskin boots because they matched her outfit perfectly, to her super chic outfits of the day. But that is to be expected since her dad is a fashion designer and rapper, and her mom is also a fashion icon. Who knows, North could just be following in her mom’s footsteps after seeing her all black outfit at the 2021 Met Gala.

While North may be a little metalhead in the making, she’s not the only one keeping Kardashian on her toes. According to Kardashian, her three other kids — 5-year-old son, Saint, 3-year-old daughter, Chicago, and 2-year-old son, Psalm — with her ex Kanye West all have their own “thing” right now.

“Saint is like a video game, tech wiz — like, amazing,” she told DeGeneres. “And Psalm is really into PAW Patrol and Cars. Like, every kid is so different. But Chi-Chi is my little princess. Anything princess, anything girly girl. That’s her.”

While Kardashian admitted that all of her kids are very well behaved, they do tend to give her a hard time. Her followers have seen this when Kardashian got called out by North for using a “different” voice in her videos posted to social media and for claiming to be a big fan of Olivia Rodrigo when North countered that she “never listens” to it.

“North, I thought she was going to grow out of this like, ‘I want to be an only child’ phase,” Kardashian said. “She hasn’t. It’s a struggle even to go to school. There’ll be times when she’s like, ‘I’m not riding in the car with my brother.’ So morning drop-off has to be a fun thing, and luckily, so many of our friends and cousins, they all live in the same neighborhood, so I’m the carpool mom.”