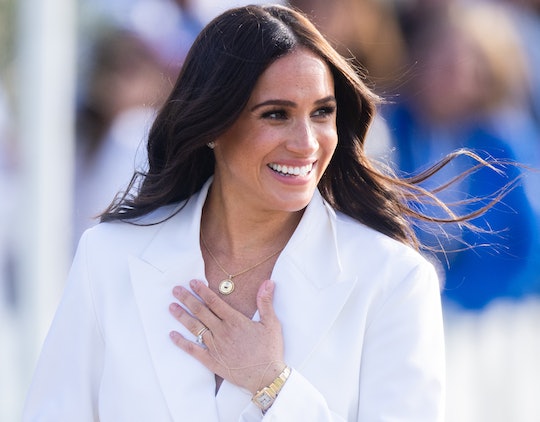 Meghan Markle Made A Sweet Little Tribute To Her Daughter Lilibet

Meghan Markle’s jewelry choices got a whole lot easier once she became a mom because now she has a theme. When she joined husband Prince Harry at a polo match at the Santa Barbara Polo & Racquet Club in California recently, she wore a ring honoring 11-month-old daughter Lilibet “Lili” Diana to the event. Because even though her little girl didn’t join her at the polo match, her mom clearly wanted to keep her close at hand. Get it?

The Duchess of Sussex was seen sporting a ring on her right hand featuring a small, delicate “L,” her daughter’s first initial, as reported by People. (You can see a photo of it here.) If you’re worried that she left out 3-year-old son Archie don’t even, because Markle wore a necklace with the initial “A” on the same day. She also planted a big kiss on her husband Prince Harry when he and his fellow Las Padres (Spanish for “the fathers”) polo team won the tournament, so the polo match somehow managed to be a big Sussex family event even without her children being in attendance. Such is the way it often is with these two proud parents; whether their kids are with them or not, they always seem to bring them into the conversation in these subtle ways. Often using fashion and jewelry, come to think of it.

Take Prince Harry, for example. He has a briefcase identifying himself as “Archie’s Papa” which he takes on important business meetings, but also has a “Girl Dad” t-shirt to remind everyone that he is, indeed, a dad to little daughter Lilibet. Markle has also worn a t-shirt to honor son Archie; she has a “Raising the future” t-shirt to match her then-baby boy’s “The Future” onesie.

As far as jewelry goes, Markle really covers her bases. She has necklaces with both of her children’s astrological signs created by Logan Hollowell, Taurus for Archie and Gemini for Lilibet, which she debuted on her 40th birthday. She wore the constellation necklaces layered together last August, proving that even in the early days of being a mom of two she knew how to give equal attention to each of her kids.

It will be interesting to see what the busy mom of two wears when she visits the UK next week for Queen Elizabeth’s Platinum Jubilee, especially since she will likely be celebrating her daughter’s first birthday at the time. I predict more child-focused fashion.

More Like This
You’ve Probably Been Pronouncing “Lilibet” All Wrong
Meghan Markle Proves Once Again She's Totally Going To Be A Snack Mom
Meghan Markle Calls On Men "To Be Vocal" In The Aftermath Of Roe v. Wade Ending
Prince Charles Got All Mushy When He Met Lilibet For The First Time