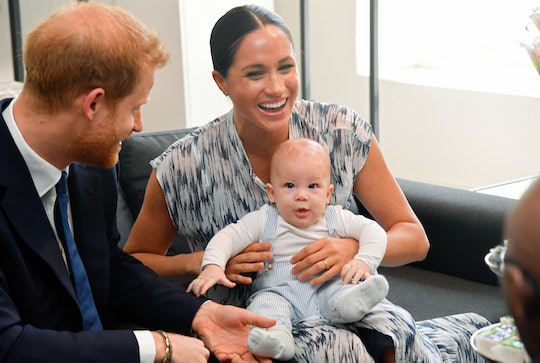 Can you imagine the cute photo-ops?

Now that they're living in the United States, Meghan Markle, Prince Harry, and Archie's U.S. Thanksgiving might be a little low-key.

This will be Markle and Prince Harry's third Thanksgiving together as a married couple and second with their son, Archie. But it will be very special in its own way, since it will be their first Thanksgiving living in their Montecito, California home and first since stepping down as senior members of the royal family. The couple has not announced their plans for the holiday amid the current coronavirus pandemic, but knowing Markle and Prince Harry, it will be as special as it can be given the circumstances.

Their Thanksgiving will likely be spent with loved ones, especially since Markle's mom, Doria Ragland, lives nearby. And there will probably be no shortage of delicious food. In a post made in 2014 on her now-deleted blog, The Tig, Markle posted recipes for her readers to cook on Thanksgiving, according to Cosmopolitan, and wrote that she loves "a brined, roasted, and stuffed turkey." She has also been known to make a perfectly roasted bird, according to People. In addition to spending time around the dinner table with family members, it's possible that Markle and Prince Harry could donate some of their time to charity work. Thanksgiving is the season for giving, after all, and the couple has lent a hand to those in need multiple times since moving to California.

In a 2016 blog post on The Tig, Markle wrote that charity was a big part of her family's Thanksgiving traditions, according to the Mirror. "Despite the contrast of my two worlds growing up, there was a powerful commonality: both my parents came from so little so they made the choice to give a lot —buying turkeys for homeless shelters at Thanksgiving, delivering meals to patients in hospice care, donating any spare change in their pockets to those asking for it, and performing quiet acts of grace — be it a hug, a smile, or a pat on the back to show ones in need that they would be alright," Markle wrote.

But, until the couple confirms their plans the holiday, no one (except them) will know for certain. It's very likely that people won't know their plans until Thanksgiving is over.

Last year, the family of three reportedly spent Thanksgiving in Canada on Vancouver Island at their vacation home, where they celebrated with close family members, according to People. The couple was on a break from royal duties at the time, according to Town & Country, and chose to spend it with family across the pond.

Archie was only 6 months old at the time. And now that he is nearly a year and a half, this Thanksgiving is going to be that much more special for him — especially since he'll be able to eat a lot more food from the dinner table. Although Thanksgiving might be scaled down this year due to the current coronavirus pandemic, it's likely that it will be still just as special for the Sussexes, regardless of the size of their celebration.

This article was originally published on November 20, 2020