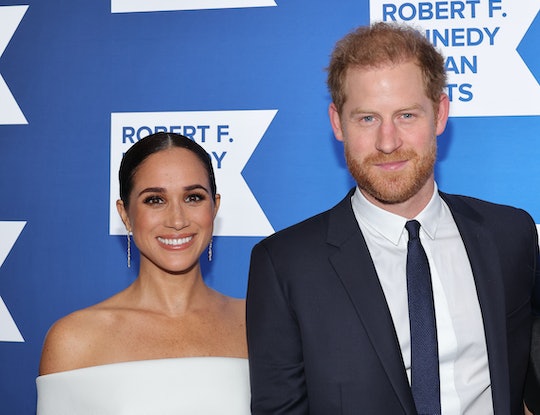 She wore it for a “very special date night” with Prince Harry.

Meghan Markle and Prince Harry enjoyed a glamorous night out in New York City on Tuesday. The couple were being feted at the 2022 Robert F. Kennedy Human Rights Ripple of Hope Gala, where they received an award for their “unwavering commitment to social change” and the work they’ve done to “protect and advance equity, justice, and human rights” through their Archewell Foundation, and the Duchess of Sussex really dressed for the occasion. She wore an off the shoulder white dress complimented by a very special aquamarine ring that was once worn by her late mother-in-law, Princess Diana.

Markle has often turned to special pieces from Princess Diana’s jewelry collection since becoming a member of the royal family in 2018, particularly during significant events. Like being given an anti-racist award in New York City at a gala, for example, an evening dad of two Prince Harry jokingly referred to as a “very special date night.” And certainly date nights as parents of 3-year-old son Archie and 1-year-old daughter Lilibet are special enough on their own.

As was marrying her very special prince back in 2018, the first time the mom of two was seen wearing this particular piece. Markle wore this aquamarine ring at her 2018 wedding reception, when she changed into a different white dress after marrying Prince Harry at St. George’s Chapel at Windsor Castle and added the heirloom ring to her wedding reception look. A ring given to her by Prince Harry, who in turn had inherited it from his own mother.

The ring is certainly a statement piece of its own and was considered a favorite of Princess Diana’s. The royal heirloom that was commissioned by Asprey for the former Princess of Wales is a 24-carat square cut emerald ring set between two solitaire diamonds, and is reportedly worth around $90,000.

When Markle first wore the ring at her wedding reception, it was just one of the sweet ways she honored her late mother-in-law on such a significant day. She carried a bouquet of flowers that included Princess Diana’s favorite blooms, forget-me-nots, and her engagement ring from Prince Harry was created with two of Princess Diana’s own diamonds.

Princess Diana’s own engagement ring was also passed down to Prince Harry when she died in 1997, but he very graciously gave it to his older brother Prince William when he proposed to wife Kate Middleton in 2010. Which naturally meant that he needed to go a different route when he proposed to his own wife in 2017.

Fortunately, Prince Harry had some other lovely pieces of his mother’s jewelry to share with his wife. Like a lovely aquamarine ring to wear on a very special date night in New York City.