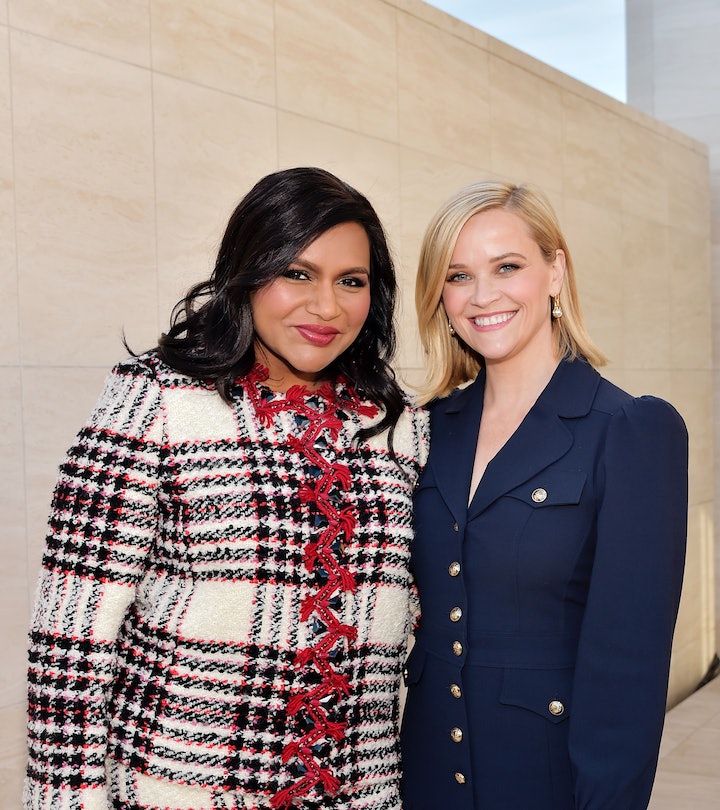 Is there *anything* Reese Witherspoon doesn't do well?

It should come as no surprise to hear Mindy Kaling say Reese Witherspoon's baby gift was incredible. Leave it to Witherspoon to deliver in all aspects — whether it's putting on an incredible performance, being a great friend, or giving the best gift ever.

When Kaling secretly welcomed her second child — a son named Spencer — in September, her famous friends and coworkers were there to congratulate her with gifts and well wishes. But in a new interview with PopSugar, Kaling admitted that her Wrinkle In Time costar and Legally Blonde 3 collaborator, Reese Witherspoon, gave her the best present because it thought of everyone in the family.

"I felt like the minute I got back from the hospital, there was a gorgeous gift for Spencer, with beautiful clothes and toys," she said. "And this is why you know a gift is from Reese Witherspoon — she got my older kid something. My daughter, who didn't do anything, got all these beautiful clothes and toys, too. And she sent us food, so we didn't have to cook for four days. So, that to me, is just a very Reese Witherspoon-type present where it's thoughtful but in a macro way. Like, she knows what's going on in your life. That was impressive to me."

Hearing that Witherspoon not only thought of her newborn, but Kaling and her 2-year-old daughter, Katherine, shows just how much she cares. But this makes sense since Witherspoon is a mom of three and probably has a pretty good idea as to what kind of gift a new mom would want to receive.

It's safe to say that Kaling knows a thing or two about good gifts, too. When Kaling gave birth to Katherine (whom she adorably calls Kit for short) in 2017, another Wrinkle In Time costar, Oprah Winfrey, had her presents delivered to Kaling in a U-Haul truck. "They arrived with a hand-carved bookcase, prettier than any professional dollhouse you had ever seen that contained a hundred of the classic essential books in children's literature," Kaling recalled to USA Today in 2018. "And I held my baby up to it and I said, 'Did you see what Miss Winfrey did for you?'"

While Kaling admitted to PopSugar that Winfrey's gift "was pretty hard to top," it sounds like Witherspoon's present — which included every member of the family — came in a close second. Let's be real, it was super sweet for the actress to think of Kaling's oldest, especially since she admitted that Kit had a hard time adjusting at first to her baby brother. "She was very suspicious and worried about him at the beginning," Kaling told TODAY in October.

"Because I think in her mind, she thought that he would come out as a 2-year-old. She kept saying like, 'I'm really worried about my toys.' And then when she saw that he was just like this helpless, little, adorable blob, but like, not that interested in toys at all, she was like 'Oh, I love this guy.'" Awwww.