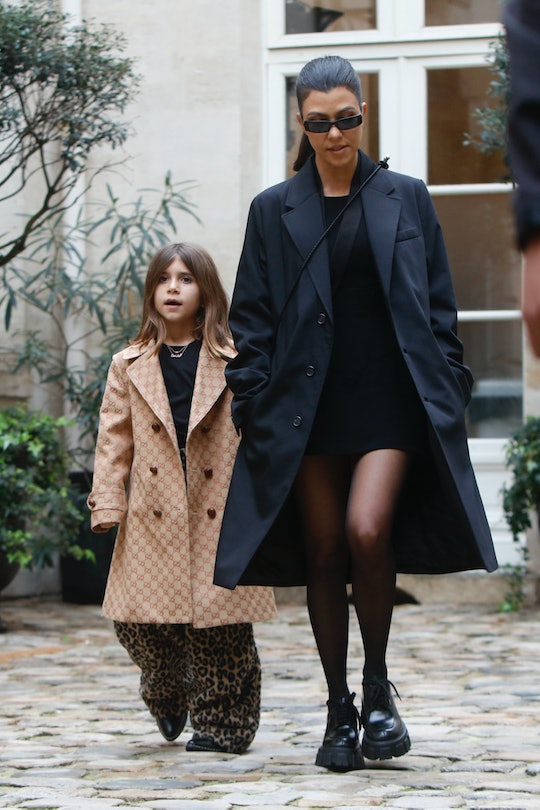 And the amateur makeup artist is loyal to Aunt Kylie Jenner’s products too!

Not to be outdone by cool cousin North West, who recently gave her stylish mom a pretty impressive “Mommy Minion” makeover, Penelope Disick recently hopped onto the TikTok account she shares with Kourtney Kardashian, her Poosh-founder mom, to transform little brother Reign into an adorable, bright yellow Minion. The famous siblings had a blast when they hopped on the bandwagon of this viral trend, and it didn’t hurt that they had access to some professional (and recognizable) makeup palettes.

In the sweet brother-sister video, which has already racked up more than 2 million views, Penelope practiced her artistry and on-point TikTok-ing on her super cute little brother. Reign was a good sport as he donned a white turban towel to keep his hair out of his face and make the transformation experience extra official. He even wore a bright yellow T-shirt and got into the Minions Spirit by partaking in the viral trend of carrying a bunch of bananas. “Minion party” read the caption on the “pandkourt” account , which is run jointly by Kourtney Kardashian and daughter Penelope.

In a move that would undoubtedly make grandmother and momager, Kris Jenner, proud, Penelope also showed off some brand loyalty to beauty mogul Aunt Kylie by using some of her Kylie Cosmetics products in the video.

While North West might get the credit for being the most creative Kar-Jenner, Penelope has distinguished herself as the mini queen of kiddo birthday parties. In keeping with the family penchant for throwing epic parties, Penelope’s celebrations have boasted unforgettable details like biodegradable balloons, a delectable IHOP spread, a dreamy Moana theme, and fantastical unicorns.

While you might imagine that the Disick kids — Penelope, Reign, and 12-year-old brother Mason have access to every cool gadget under the sun, it’s fun to see them having some low-key fun with nothing more than makeup, a few fruits, and each other.

And while both Penelope and her bestie cousin North West both share TikTok accounts with their moms, it’s only a matter of time before the duo break the Internet with their very own shared account to upload beauty tutorials and makeup transformations.

And if becoming a beauty influencer doesn’t work out, Penelope definitely has a future in social media comedy and hilarious reenactments, poking fun at her famous mom to the delight of Kardashian fans (and haters) everywhere.