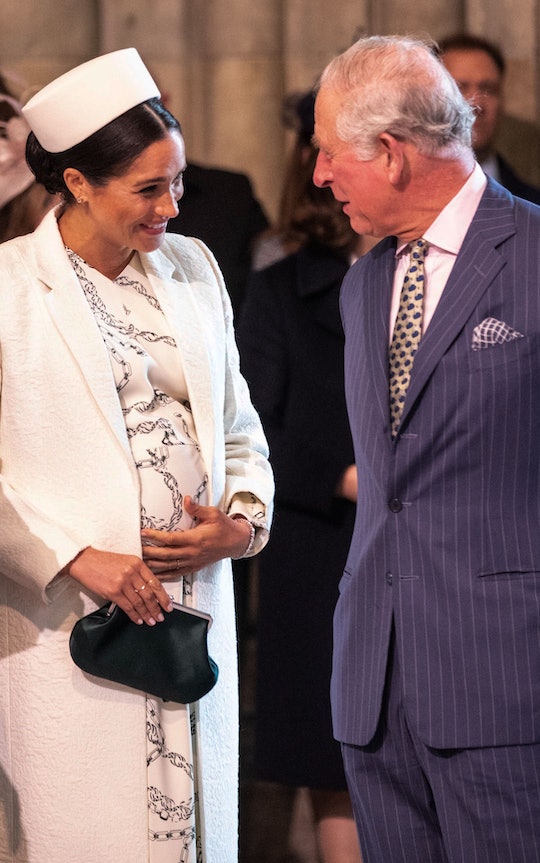 Royal fans spotted the black and white photo of the future King of England with his daughter-in-law.

After stepping down from their senior royal roles and that bombshell interview with Oprah Winfrey last year, it may seem as though that the royal family’s relationship with Prince Harry and Meghan Markle has been fraught with tension. But a wedding photo of the Duchess of Sussex and her father-in-law Prince Charles spotted inside his home of Clarence House hints that he has not forgotten the day she married his son and he walked her down the aisle.

The photo was spotted in footage shard on YouTube after the Duchess of Cornwall hosted an event for International Women’s Day at Clarence House to honor three women rowers, and royal watchers noticed a certain photo in the background. A photo of Prince Charles walking Meghan down the aisle at St. George’s Chapel at Windsor Castle on May 19, 2018, the day she married Prince Harry and became Duchess of Sussex.

It was an emotional day, made perhaps more so by the fact that Meghan’s father Thomas Markle did not attend the wedding to walk his daughter down the aisle. Royal fans will remember that there was quite a lot of drama ahead of the wedding with Thomas Markle, so it was quite a lovely moment to see Prince Charles support her that day. A day he clearly has not forgotten.

Prince Charles has been quite absent from Meghan’s life as of late, not to mention the life of his son Prince Harry and two grandchildren, 2-year-old Archie and baby girl Lilibet “Lili” Diana. In fact, he has yet to meet Lilibet in person. While we don’t know if they have been enjoying Zoom visits together, Prince Harry has only returned twice since March 2020: once for a statue unveiling for his late mother Princess Diana and once for the funeral of his grandfather Prince Philip.

Perhaps having a photo of his daughter-in-law on display on such a special day is a move towards reconciliation. Much like his recent essay praising Prince Harry’s efforts to end climate change appeared to be a nudge closer to each other. If there is still distance in the first place, of course. Regardless of where their relationship may be at this moment, it’s nice to see Prince Charles so openly displaying his affection for his daughter-in-law.