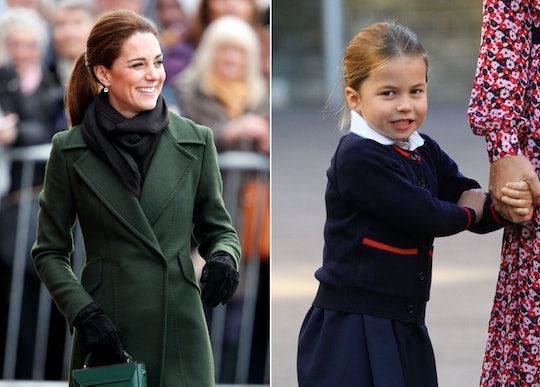 She is truly her mom’s mini me.

Princess Charlotte is a little mimic, this we know for sure. There have been several times the 6-year-old daughter of the Duke and Duchess of Cambridge has copied members of her family in public, but her most adorable new trait is perfecting her mom Kate Middleton’s ponytail flip. The young royal has picked up on her mom’s tendency to sort of fiddle with her famously amazing hair, and it’s just about the cutest thing you’ll see today.

Middleton, who also shares 8-year-old Prince George and 3-year-old Prince Louis with husband Prince William, has long had a habit of playing with her hair when she’s out in public. It could be nerves, of course, or maybe she can’t get enough of her own shiny brown locks. But whatever the case may be, she was seen during a Zoom meeting in 2021 flipping her ponytail in exactly the same way her daughter Princess Charlotte did when she was on her way to her first day of school at Thomas’s Battersea in London in 2019.

The adorable twinning moment was captured by TikTok user @royalfancams, and their ponytail flips are so similar it’s uncanny. “Like mother like daughter,” the video is captioned.

It makes sense that Princess Charlotte would so easily pick up on her mom’s mannerisms. She is already quite an actress, apparently, and loves putting on a performance. And her skills as a mimic have already been well-documented; when she was just 3 years old she copied her great-grandmother Queen Elizabeth’s famous wave from the balcony of Buckingham Palace during the annual Trooping The Colour in 2018. And in 2019 she got a bit naughty sticking her tongue out at her grandfather Michael Middleton at a sailing event; to be fair, he was reportedly doing the exact same thing. So what can you expect from a little mimic?

While Princess Charlotte has copied others, she’s really all about her mom. The mom and daughter apparently perfected the floss dance in 2020, according to Prince William. And Princess Charlotte could do worse when looking for a good example of a perfect curtsy than Kate Middleton. In 2019, Princess Charlotte not only matched her mom’s forest green look for Christmas Day church services with the rest of the royal family, she also curtsied for Queen Elizabeth just like her mom. This girl is truly her mom’s mini me.

More Like This
24 Photos Of Princess Charlotte Making Silly & Cute Faces
Kate Middleton Explains Why Her Kids Couldn't Attend The Top Gun: Maverick Premiere
Meghan & Harry Celebrated Their Anniversary As A Family Of Four For The First Time
Prince Harry & Meghan Markle Could Take Us Inside Their Home For A New Docuseries