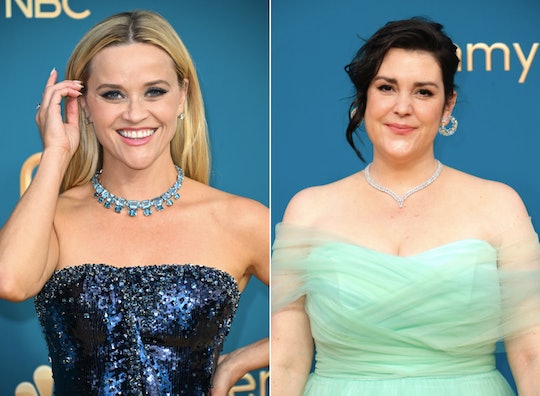 Reese Witherspoon is truly a girl’s girl. When she’s not busy being the boss that she is as one of the most powerful women-centered content creators in Hollywood, she’s out there supporting her fellow friends and former co-stars in a really awesome way. In her recent Instagram Story spree from the 2022 Emmys, Witherspoon shared love for fellow actresses Mariska Hargity, Jean Smart, Selma Blair, and Jennifer Coolidge. But it was her “super emotional” Sweet Home Alabama reunion with Melanie Lynskey that really brought the feels.

Witherspoon hopped onto social media to share an adorable BTS picture of the former rom-com co-stars at the glitzy award show. Both women looked absolutely dazzling in their glam, gowns, and jewels as they posed together for a nostalgic selfie.

“This reunion made me super emotional!” the Legally Blonde star wrote over the picture. “I love you @msmelanielynskey,” she also added below.

Of course no self-respecting Sweet Home Alabama movie reunion would be complete without the famous Lynyrd Skynyrd song too, and Witherspoon delivered on that too. Lynskey also reposted the same picture to her own account and gushed about Witherspoon as well. “Me too,” wrote back the Candy star. “I adore and admire you so much.”

It’s been a hot minute since these two have been spotted together. The actors and mothers starred in Sweet Home Alabama way back in 2002. While Witherspoon played the lead role of Melanie Carmichael, Lynskey played the supporting role of Lurlynn (aka, the mom who brought a baby to a bar).

Fast forward 20 years later and to Lynskey’s stratospheric rise through Hollywood. Now a headliner herself, the actress was nominated for Outstanding Lead in a Drama Series at the 2022 Emmys for her incredible performance in Yellowjackets.

The talented women likely had a ton to catch up on since they last saw each other. Lynskey is now married to actor Jason Ritter and has a 3-year-old daughter. As a parent of three, Witherspoon is at a very different stage of her life as a working mom to older children Ava, 22, Deacon, 18, and Tennessee, 9.

But we’re pretty sure these A-listers still have plenty of things to gab about. Let’s just hope one of the things on their catch-up list is the possibility of a Sweet Home Alabama sequel. Witherspoon has definitely teased that cinematic possibility in the past to the delight of fans of the film who definitely want to see more southern lovin’.

Until then, we hope the these two were able to celebrate together at an Emmys after-party in a really fun bar — hopefully without a baby this time.