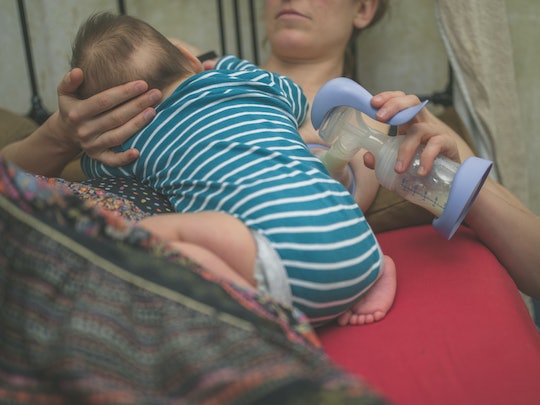 Pumping is the worst. The soul-sucking, mind-torturing, physically-draining worst. When my daughter was born I was unable to breastfeed, so the rational solution was to pump. I was determined to have my child consume breast milk, figuring breast milk from the bottle is better than no breast milk at all. She would still be getting all of the important nutrients and antibodies from my milk, just through a secondary source. So I exclusively pumped for approximately nine months and every day I fantasized doing the things all pumping moms dream about doing. Sometimes I literally dreamed while pumping, all because I would fall asleep and wake up to the sound of an idle pump and milk splashing out of the pump bags. Those days called for an extra cup of coffee.

When I got pregnant with my second child I gave myself an ultimatum: either figure out how to breastfeed or stick to formula. Those were my options, as I was not willing to torture myself for a second time. Luckily, I pushed through the first six weeks of breastfeeding pain, and was able to successfully breastfeed my second child. Listen, I'm sure there are plenty of mothers who will say pumping was "the best thing ever" and that they would "do anything possible to make sure their children are getting the best they can." Yes, I agree to a point: I, too, sacrifice a lot for my children. But, I was not willing to sacrifice my mental health again, especially knowing what I know now.

You see, I didn't realize just how time consuming and draining pumping would be. I didn't realize how inefficient my pump was and I was unaware of the resources that assisted pumping mothers. This was eight years ago. Now my friends who pump have all of these amazing new technologies that did not exist when I was starting out (or I wasn't aware of them). I was the first out of all of my close friends to have children, so I didn't know there were Facebook groups devoted to breastfeeding and pumping, either. I was not privy of exclusive pumping mommy circles, nor could I text another breastfeeding mom friend and ask her what was what. In other words, I was weathering the storm on my own and trying to come out only slightly unscathed.

Each time I pumped — whether it was at home, in the car, at a park, or at work — I would dream of a world without pumping. A world where pumping was just a simple and quick thing one could do. A world of hands-free, pain-free, and attachment-free pumping, like this: