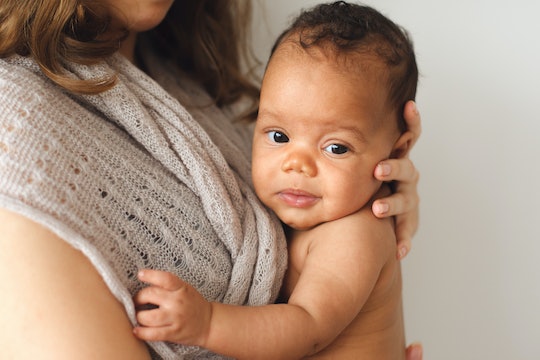 What I'd Never Change About My First Year As A Mom

There are a few things I would definitely change about my first year as a mom. First and foremost, I would have a better idea of what I was supposed to take that hospital. I definitely would have decided to take my daughter's pacifier away at three months, instead of 15, because no one needs that drama and tears in their life. Still, for everything I would change, there are so many more things about my first year as a mom I would never change. Even things that seemed so dire and intense, make perfect sense as I look back now and see how they helped make me into the best possible mom I can be for my daughter.

When our daughter arrived in our lives (you can read her birth story here if you're interested), she was 3 days old and bundled like a burrito in the NICU. We had received the call from our adoption agency that morning that, surprise, our daughter was already here and waiting for us. After years of infertility, neither of us felt comfortable preparing for a child. (That seemed too much like counting our chickens before they hatched.) We didn't have a nursery or even a crib or a single outfit, and we hadn't read a single book about babies. Our daughter's first weeks and were trial by Google until, of course, I finally had enough sleep to remember people wrote books on babies. Maybe, just maybe, one of those bad boys would come in handy, right?

However, despite crash-landing into motherhood at an unbelievable speed while making my way through a pretty unforgiving learning curve, there are so few things I'd change about the first year I spent with my beautiful family of three.