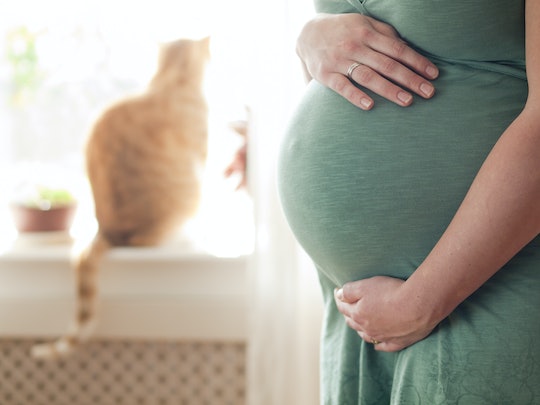 Let me give you a little tip when it comes to commenting on pregnant women's bodies (or any woman's body): don't. Seriously, if you must, just say something positive like, "You look amazing." Almost anything else could get you some serious and extremely warranted side-eye. I asked moms to share the worst thing they heard after they started showing and, just as I suspected (because clearly not enough people have heard my tip, yet) it wasn't pretty.

Even when people think they're paying a pregnant woman a compliment, they're probably being rude. For example, when they tell a woman she's, "Barely showering," or says, "I couldn't even tell you were pregnant!" you could be talking to someone who has been struggling to conceive or body-conscious. Your "compliment" just turned hurtful, my friend.

I showed quickly and had to suffer that one pretty horrible "pregnancy game" when strangers or acquaintances try to guess how far along you are. They always fail miserably (because, you know, they're not doctors) and then exclaim, "Wow! You look like you're ready to pop!" Well, um, thanks for that, I guess? I also had the unenviable task of looking for a new job while pregnant. This involved carefully choosing baggy outfits to conceal my growing bump, and artfully sitting at an angle during interviews while wondering the whole time if the interviewer could tell that I was pregnant.

Growing a new life is challenging in many ways, but (for most of us) those challenges are nothing when dealing with those nonsense comments pregnant women have to put up for 40 (more or less) weeks. Comments, unfortunately, the following women know all too well: