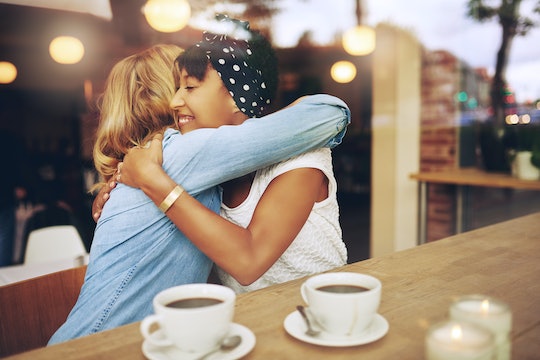 13 Things Feminist Moms Refuse To Say To Their Mom Friends

When I announced my pregnancy to friends and family, I was so excited to experience pregnancy, labor, delivery and motherhood with a set of like-minded women. I had some friends who were already mothers and some friends where becoming mothers around the same time I was; all who consider themselves proud feminists. I knew I was going to be supported and my experience was going to be valued and we were going to go through this "together." Well, I thought I knew. Turns out, there are things feminist moms refuse to say to their mom friends that I, sadly, heard from a few mom friends who, if asked, would call themselves feminists.

I had this idea of what motherhood was going to look like and in reality, of course, it has failed to live up to my unrealistic expectations. For the most part, that's a great thing. I have learned that taking care of yourself is the most important; I have learned that motherhood doesn't mean you have to sacrifice everything you want and/or need; I have learned that parenting with a partner means both people have the same amount of responsibility and throw gender stereotypes and social expectations out the damn window. Sadly, I have also learned that motherhood isn't always a bonding experience amongst women. It can be, to be sure, and I have some wonderful mom friends who I have grown closer to because we have babies and are experiencing similar things at similar times. However, it has also been isolating. The "mommy wars" are real, and when my choices don't align with someone else's, well, there's judgement and shame and blatant attacks (usually carried out via social media) that can make motherhood feel more like a battle than a bond.

As feminists, who believe in the social, political and economical equality of all genders, how we talk about and to other women is important. We should be supporting women and their choices, even and especially when they differ from our own. We need to fight against the very real urge to tear one another down in order to feel validated in our own decisions. We definitely need to avoid saying the following things, because motherhood is difficult enough.