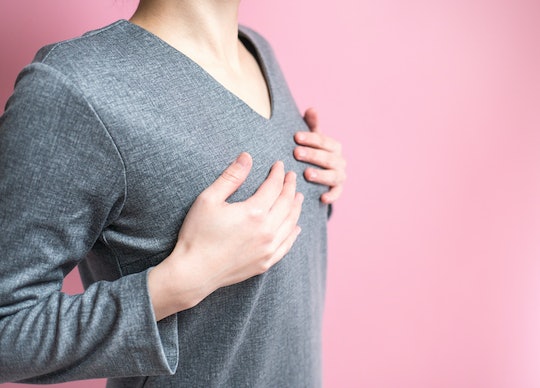 Women's bodies are fascinating. On the very basic, primal level, they're fascinating the way any living organism is. Sociologically, all the absolute toxic sludge we constantly douse them in is, similarly, fascinating. Horrifying, yes, but also interesting from an academic perspective. This is particularly true when those bodies are pregnant — the body changes, but it's also scrutinized, judged, and reassessed for its social value. That's why there are things I wish I could say to my pre-baby boobs, both as a warning and as a source of encouragement.

Honestly, I don't want to get too into the social aspect of breasts in the context of pregnancy and breastfeeding. It's a lot to unpack and, four and a half years after my last pregnancy and two and a half years after my last child was weaned, I still have barely made a dent. But that's OK because there's plenty I wish I could time travel and tell my pre-baby boobs about from a purely anatomical perspective.

Everyone will have their own experience when it comes to babies and breasts. Bodies are fascinating in that they all work basically the same way but there's a very broad range of "normal," so much so that the term is more or less useless. So trust that I can only speak from a very personal perspective, and how your breasts change as you navigate pregnant and postpartum life will undoubtably vary. But if I could go back in time, here's what I would say to my pre-pregnancy boobs: