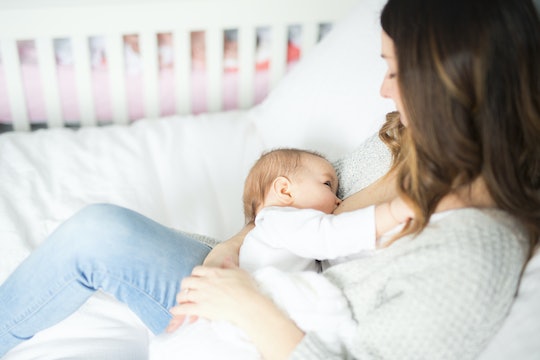 15 Moms Share The Moment They Fell In Love With Breastfeeding

Moms choosing (and able) to breastfeed know all about how rewarding the experience can be. While there can be plenty of hiccups — undersupply, oversupply, problems with latching, infections, and being touched out — many nursing moms still do what they can to breastfeed as long as possible. They do it for their babies and, well, they do it because those bonding moments are unique and life-changing. So when I asked moms to reveal the moment they fell in love with breastfeeding, I wasn't at all surprised to hear some of the most heartwarming, tear-jerking, precious stories I've ever heard. Motherhood, you guys. When it isn't making you question every decision you have ever made, it's emotionally terrorizing you with special moments that shake your soul.

Because my son was in the NICU from the minute he was born, it took a while for the two of us to finally get started with breastfeeding. Eventually, though, I was allowed to attempt to nurse when my son was a week old, and I still remember that first session like it was yesterday. I remember sitting down on a chair as the nurse brought my newborn over to my arms. It felt surreal and not entirely natural at first, I admit, and probably because I was terrified of dropping or harming him in some way. After all, since he was in the NICU he had so many monitors connected to him. Once he finally latched, though, everything else faded away. I felt so connected to him and it was the most magical moment I had ever experienced.

My only regret is that I eventually had to stop breastfeeding after four months, because the stress was wearing me down to the bone. I was barely producing enough breast milk to sustain my son, so I would pump or feed him every 2-3 hours and, as a result, I could barely function. So, that's how my breastfeeding journey ended, but that definitely doesn't mean I didn't experience moments when nursing was nothing but a physical representation of the bond my son and I intrinsically shared. So, with that in mind, here are the moments other moms realized they were falling in love with breastfeeding, one session at a time: