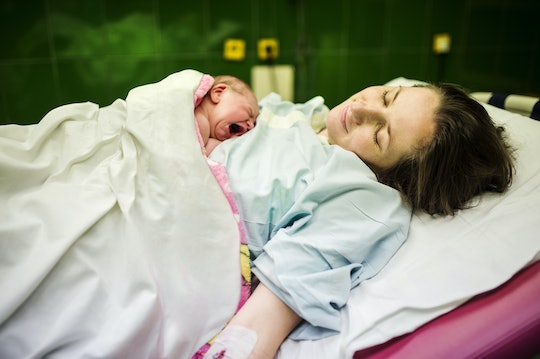 15 People I Thanked After I Gave Birth

You wait the better part of a year and finally, in a dramatic burst of blood, sweat, and tears, it happens: you give birth. Once the dust settles and everyone is confirmed healthy, the adrenaline that has been pumping through your system redirects from determination to euphoria. In that moment, you feel like a star and, like a star at an awards ceremony, you're filled with an overwhelming sense of gratitude. I immediately wanted to thank people after I gave birth, and not just the people directly responsible for a happy outcome. I mean, like, a very wide, extended circle.

I feel like the gratitude I felt after birth was equal parts euphoric and macabre. I was absolutely on cloud nine and in love with my little ones, but I feel like a lot of that gratitude was born of the fact that I was so scared before giving birth, and almost convinced that something "bad" was going to happen. I don't think I ever allowed myself to fully explore that fear, but it evaporated after my children were in my arms and its absence made me feel so light (of course expelling enormous babies with accompanying placentas probably contributed to that lightness as well).

Of course, that pre-birth fear was quickly replaced by other fears (SIDS, kidnapping, failure to thrive, etc.) but that's another story for another day. Today's story is all about that amazing feeling so many of us get following birth. Gratitude! Appreciation! Love of humanity! I wanted to share all that with everyone who had helped me get to this point, including: