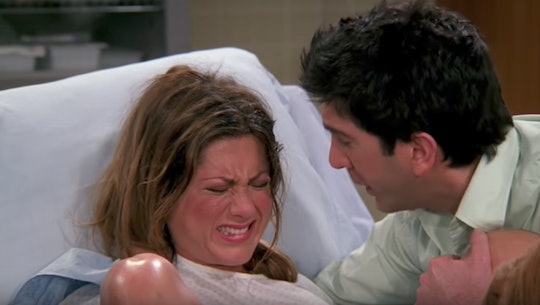 If you're a fan of television and movies, it's safe to say that, according to the media's account of labor and delivery, if you're pregnant you're in for the worst experience of your damn life. Watching a childbirth play out on TV or the big screen means watching a woman sweating, screaming, swearing, flat on her back with her legs in the stirrups. The agony appears to be all too much. No wonder so many women are terrified of childbirth. But is it really that bad? Or are there things that actually hurt more than giving birth? I decided to go to the source — women who've actually been through labor and delivery — for the answer.

The first time I gave birth, my baby was a preemie and I was given demerol because I was experiencing a full-blown panic attack. While the labor pains sucked, they weren’t what I’d call unbearable. So when I was pregnant with my rainbow baby, I was pretty confident in believing that labor a second time around wouldn’t be too bad, either. Plus, I’d been reading up on Hypnotherapy and all the other crunchy intervention-free methods of birthing a baby. I had it under control. Everything was going to be fine.

I was 40 weeks and two days pregnant and the contractions began. I admit, they were freaking awful, especially toward the end. It felt like I had no control over my body anymore, and that's a pretty terrifying feeling. So, yes, childbirth was painful, but if I'm being honest, my extremely lengthy recovery was much worse. So yes, there are things that are far worse than labor and delivery, but don't just take my word for it. Here's what a few moms had to say about their experiences: