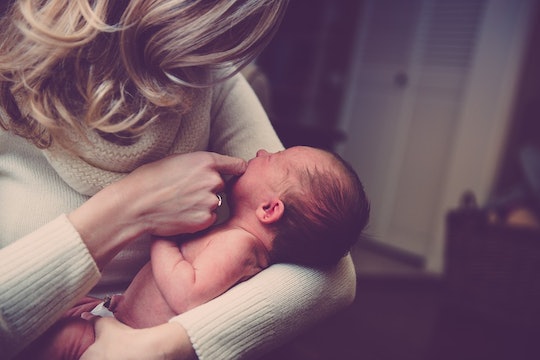 Has anyone ever said something really ridiculously offensive or stupid to you, and in the moment you don't know how to respond but a few hours later you're like "OMG that would have been the perfect retort?" The French have a phrase for that: l'esprit de l'escalier (spirit of the staircase, which is presumably where you are when you get your brilliant idea).

If you've just had a baby, people feel particularly empowered to say horrifically dumb stuff. It seems there are things people feel fine saying to new moms that they just really, and truly, shouldn't. When you're on the receiving end of this stupidity, you're often so gobsmacked by the sheer thoughtlessness or cluelessness of the statement that you find it difficult or even impossible to come up with a reasonable response, let alone a witty one. Don't worry, though; I've got you covered.

Below I have included some incredibly silly, yet distressingly common things a new mother can expect to hear in the weeks following the arrival of her little one, along with a typical response and one guaranteed to chasten the most buffoonish of friends, family members, and random strangers who feel like you need their unsolicited commentary. You can go ahead to feel free to use either, but it might be best to keep the snappier quips in your head. Ultimately, unfortunately, sometimes you just have to remember, in the immortal words of Forrest Gump's mom "Stupid is as stupid does." Then again, I'm not the boss of you, so you live your best life and if giving them hell is required them give them hell you shall.