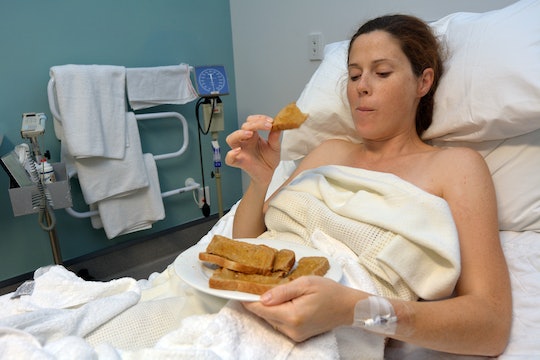 When I recently asked a group of moms to describe their first postpartum meal, they enthusiastically obliged. In fact, the phrase "it tasted so good" came up a lot which, of course, wasn't all that surprising. After all, there are so many dietary restrictions when you're pregnant. Sushi. Soft cheese. Too much caffeine. Deli meat. Sprouts. Runny eggs. Certain fish. Alcohol. It's no wonder pregnant women everywhere dream and plan for weeks (or even months) about everything they will devour once their baby is born.

Of course, it's not just the pregnancy diet restrictions that create a need to indulge postpartum. Delivering a baby is work. It takes a lot of time and/or energy, during which time many women do not have the opportunity (or medical permission) to eat. So lots of us are ravenous when we're done pushing and/or having another human being cut from our bodies, whether or not we're even dreaming of previously forbidden foods. Hunger, as they say, is the best sauce.

An emergency c-section and a clerical error had me on a liquid diet for a long time after the birth of my first child, so by the time I got to eat solids I was so emotional and exhausted I can't remember what I had. After the birth of my second kid, however, I can still taste the French toast (with extra syrup), chocolate milk, and ice cream. I'd planned it for months. You see, I'd managed gestational diabetes starting at twenty four weeks. That's almost four months of minimal carbs and almost no sweets whatsoever. For a carb queen like me, it was basically torture. (It wasn't actually torture, but in addition to being a carb queen I am also a drama queen, so just let me live my truth here.) I was determined, therefore, to test the human body's capacity to ingest sugar. I'm pleased to report that while I crept to the very edge of the possible, two years later I think I'm finally coming down from that initial sugar rush.