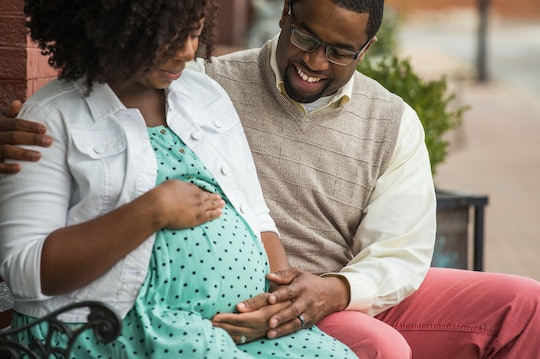 6 Reasons Why You Shouldn't Hold Back When Celebrating Your Pregnancy

By today's standards, I was somewhat young when I got pregnant with my first child. I was newly married, about a year and a half in, when my husband and I decided we would try for a baby. I was pregnant within a month and, honestly, had minor panic attack when it happened so quickly. I now realize we were very lucky. Although I had a very difficult pregnancy, I didn't hold back from celebrating it. I found small, significant ways to celebrate my pregnancy and everything that involved my unborn child. The only celebration I went without was a sex reveal party, mostly because that's just not my style.

With my first pregnancy, I didn't do a maternity shoot because those weren't all that big a deal at the time. Pregnant women weren't dressing up in their most ethereal dresses and taking breathtaking photos of their gorgeous pregnant bellies. The second time around, though, I definitely took some cute maternity photos. During my first pregnancy, I found out I was high risk due to a heart condition. The combination of the condition and the constant monitoring took a toll on my morale, so celebrating myself and the unborn child became more difficult, I just wasn't into any of it. All I wanted was a healthy baby. However, after numerous ultrasounds and positive news, I decided I would celebrate the pregnancy and allowed for a baby shower. It was a lovely time, and I felt celebrated and loved and cared for by my closest people.

Although in the Jewish tradition a baby shower is not allowed until after the baby is born, I decided to not follow the old rules and just celebrate my pregnancy the way I saw fit. Sure I felt some side-eye from judgmental people, but I didn't care at all. I am not even religious, and to follow some sort of archaic ritual was not in my plans. So, I had a shower and it was glorious, and I recommend all mothers-to-be celebrate each one of their pregnancies any way they see fit, and for the following reasons: