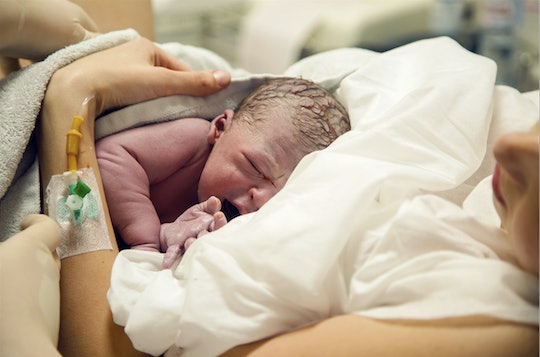 Humor is one of the easiest ways humans relate to one other. It can lighten the mood in an uncomfortable situation and serve as a protective shield against pain. Parenting is often the subject of some of the funniest jokes, in my opinion, mainly because raising humans is difficult and humor can lighten the emotional toll. Having said that, there are some post-birth jokes that need to die in a fire because OMG they really are awful. These postpartum jokes usually have something to do with a woman's vagina or a man's inability to be a competent parent, which just undermine and insult parenting as a whole. I'm sure you've heard them all, and you've probably laughed at or said a few yourself, but honestly these jokes are so stale and unfunny that they should be retired. Let's come up with something more witty, shall we?

I do believe new moms get the brunt of the jokes, because people just love commenting on mom's bodies and parenting styles and everything in between. Sure, some jokes can help a new parent feel like a part of a bigger purpose, and some jokes can help parents to not feel so alone in the trenches of parenting. But a select few cross the boundary into unnecessarily crude and rude. I've heard many jokes in my short eight years as a parent and I have to say, I don't find some of them at all funny. You may think I'm reaching or I'm overreacting, but I have a phenomenal sense of humor and these jokes are, in my humble opinion, simply not funny nor witty.

I get it, too. I mean, sometimes people make jokes simply because they don't know what else to say to a new parent. Non-parents are probably the biggest "offenders" because they really don't know what parenting is like. Can't really blame them for failing to understand some of the sensitivities and intricacies that come with parenting. But, overall, it wouldn't hurt for people to be a little more mindful of the messages they are sending by making some of the following jokes:

More Like This
4 BIPOC Moms On The Beauty Traditions They’ll Never Pass Down
20 Toys You Don’t Want To Miss From Amazon’s Top Toys List Of 2022
Can Elderberry Help Prevent Illness In Kids? Doctors Weigh In
Kids With Head Lice Don't Need To Miss School, AAP Stresses In Updated Guidelines