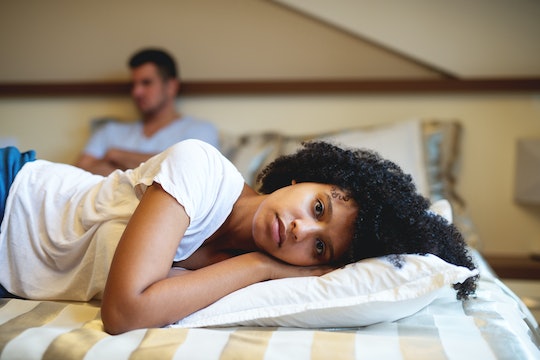 I used to be the kind of wife who told her husband everything. In fact, when we first got married I really felt like if I didn't tell my husband something that was bothering me, it was somehow failing our relationship. I've since learned that there's a lot of value in, sometimes, keeping my mouth shut. In fact, there are at least eight things I definitely don't tell my husband, and our marriage is more peaceful and stronger for it.

My partner and I got married when we were both in our mid-20s, so we didn't have much baggage coming into our marriage. Still, we told each other very little thing about our past relationships and sexual escapades. And when we tied the knot, I thought I had to tell him every last feeling or insult I thought he had caused or lobbed my way. That, my friends, was a terrible idea. It caused more arguments than we ever really needed to have, especially in the early days of our marriage, and I eventually realized that just because I decided not to fight a particular battle didn't mean I was losing it.

Now my husband knows most of what I do simply because our life is fairly simple. I don't really need to "cue him in," day and night, as we've found a groove and established a schedule that benefits everyone. But there are still things I don't bother to tell him, either because it's not worth the argument or because the world won't end if he never knows.

More Like This
How To Tell If Someone Is Lying To You: 34 Signs To Watch For
How To Support A NICU Parent, From Moms Who’ve Been There
How Do I Date As A Widow Without Guilt?
6 Sex Positions To Reduce Leg Pain