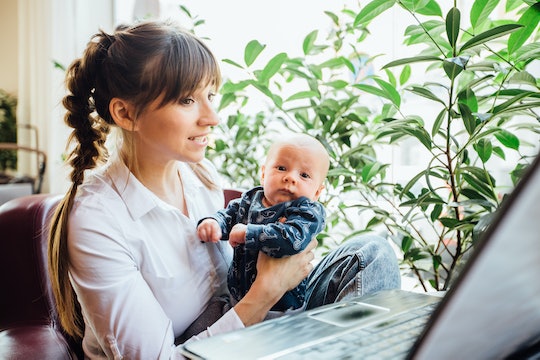 9 Things A Mom *Really* Means When She Says "I'm Fine"

I feel like I’ve been telling people what they want to hear my whole life. I’ve always been a people pleaser, and I try to avoid conflict at all costs. This hasn’t always served me well, since failing to express my true feelings can lead to unhealthy and misplaced anger (sorry, family). But sometimes it’s a necessary tactic for self-preservation. In fact, I guarantee there are things a mom really means when she says "I'm fine," and they're all said so us mothers can keep it together.

Now, in my defense, I don't say "I'm fine" to my closest friends. I unleash my fears and frustrations because they know me, and I know they can take it. But for other people, namely those who are really in no position to help me manage the dumpster fire that feels like my life at times, I don’t need to get into it. “I’m fine” is my standard response to most people who aren’t good friends, family, or medical practitioners. And I even spare those folks the hard truth occasionally, since I know how to read a room and can tell when someone might not be able to handle my TMI explanation of what set my child off on that particular day.

“I’m fine” is the go-to reply when just want to let things be. It’s greeting a neighbor on the stoop, but not inviting that particular neighbor in. It’s similar to “we should get together,” “I’ll put you two in touch,” and “I’ll have to try that place some time” — all phrases that make you feel like you checked a box on social interaction, without actually doing anything.

So if you’re wondering what a mom really means when she says “I’m fine,” it could be any of the below: