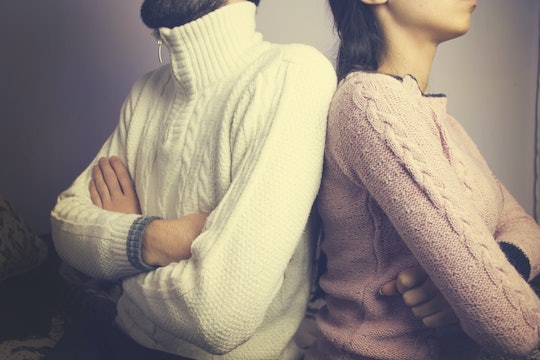 As a kid, I thought marriage always lasted forever. As an adult, I didn't really know many people who had been divorced, and I never in a million years thought it would happen to me. So when my marriage fell apart it took me a really long time to admit that divorce was the best choice for me and my kids. The split was a long, challenging process, though, and by the end of it all there were so many things I was afraid to say out loud, or even admit to feeling, when my divorce was finalized, starting with simply saying: "I'm divorced."

It was so weird, you guys. After all, this wasn't how I expected my life to go. It made me feel like a failure, even though leaving my ex-husband was necessary and probably the most badass thing I've ever done. It felt like if I avoided saying the word "divorced" out loud, though, I would be able to pretend like I was still a "good person." I now know that getting a divorce doesn't make you a bad person or a bad mom, but the time I would have rather crawled in a hole and died than admit that I was divorced.

In the days that followed the split, I also had to deal with other people's ideas about divorce and the stress and shame of having to tell everyone — from the bank teller to my boss — that my name and martial status had changed. Their responses were so messed up, too. Most of them said, "I'm sorry." To which I wanted to reply,"Why? I'm not." Others said, "That's too bad," or even, "What about your kids?" It's no wonder I didn't want to say the following things out loud. The shame that surrounds you when your marriage ends is palpable. Unnecessary, unfair, and palpable.