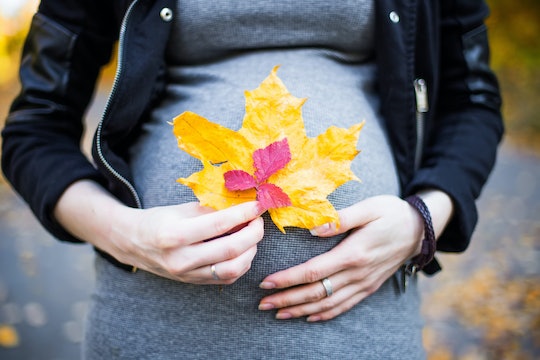 Actually, Being Pregnant In The Fall Is The Damn Worst

I might sound like a stereotypical white girl, but I love Fall. Seriously, it's the best season. I love cool nights sitting on the porch or around a fire, the earthy smell of fallen leaves, baking pies, sweater and boot weather, pumpkin spice anything, being able to stop shaving my damn legs, and Halloween. I mean, what's not to love? Apparently the answer to that question is being pregnant. There are so many reasons why being pregnant in the Fall is the worst. The worst.

I should know, too. I've been pregnant three times, and each time I was pregnant during the Fall months. My first was due in May, so I was in my first trimester in the Fall. That unfortunately meant morning sickness during Halloween, sleeping through President Barack Obama's win on election night, and not fitting into my kick*ss Halloween costume. Ugh. My second was due right after Halloween. I was so excited to potentially have a Halloween baby, but no, the little ghoul didn't comply. I did learn that it's absolutely impossible to dress your pregnant body in the Fall — one minute it was 80 degrees and I was sweating through my maternity leggings, and the next minute it was 30 degrees and I could only fit flip flops on my swollen feet. I spent last year's Fall months pregnant with my youngest, and was excited because I thought my second trimester — the magical trimester — might actually be fun during Fall. Nope. It turns out I was still nauseated on Halloween and Thanksgiving, which meant no candy and no pie.

I came to the conclusion (and rightfully so) that being pregnant during the Fall is the absolute worst. Here are a few reasons why: