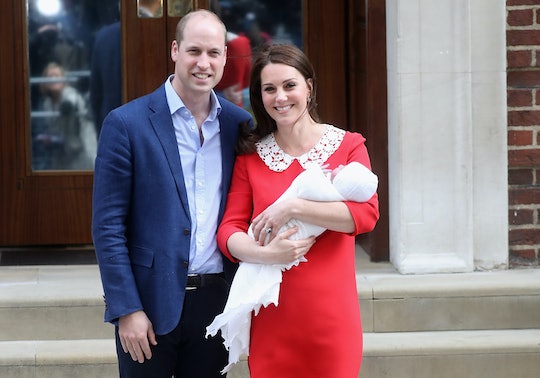 I was so excited when the Duke and Duchess of Cambridge, Prince William and Kate Middleton, welcomed their third baby to the world. Since we both had hyperemesis gravidarum during our pregnancies, and now we both have three babies, I feel a bond with Middleton. We're practically BFFs at this point, you guys. So I'm sending my long-lost BFF from across the pond some solidarity vibes, because as a fellow mom of three I think there are a a few things she should know. Namely, that it's so much harder to have baby number three than baby number one. No, unfortunately, I am not joking.

Now, I am not saying that having my first baby wasn't challenging, because it was. Becoming a mom was nothing like I expected, and the entire process was so much harder than I could have imagined. I had no idea what I was doing, I felt perpetually in over my head, and I made more than my fair share of mistakes. But once I made it through the newborn days I managed to get my bearings, figure some things out, and gained some confidence as a first-time parent.

A couple of years later, my partner and I added baby number two to our family. Some things, like breastfeeding, were way easier, because I actually knew what I was doing and had some experience under my belt. Other things, like pregnancy and postpartum recovery, were significantly harder, because unlike my first pregnancy I had a toddler to take care of. My oldest had to learn to share, adjust to being a big sister, and come to terms with the fact that she was no longer the only child. I, on the other hand, had to learn how to lower my expectations. (Yes, that's an ongoing lesson, thank you very much.)

So when I got pregnant with my third baby, I thought things would be a proverbial walk in the park. After all, I had done the whole pregnancy, labor, postpartum thing twice now, and once with a child in tow. And, thankfully, some things really were easier the third time around. I was way more relaxed — one could argue sometimes too relaxed — and I lowered my expectations. I could lie and tell you it was all a result of me being self-aware, but, honestly, I was just too tired to be as uptight as I used to be. I had enough energy to say "what will be, will be," and that ended up working out great.

But things were also exponentially more challenging, and in ways I couldn't predict. For starters, it's so much harder to be pregnant when I also had to care for two older children. I was exhausted all of the time, and felt guilty because I was often too sick or too tired to keep up with my kids, my house, and my job. By the time I went into labor and delivery I already felt like I was dangerously behind.

When I came home with my third baby, it was like I had to figure out how to be a parent all over again, then go about the work of teaching my older kids how to be siblings.

Then came delivery, which one would assume would have come much easier too, right? I mean, I had done it twice before, so I theoretically knew what I was getting into and what to expect. It turns out, sometimes knowing what you’re getting into makes the entire experience worse. For example, when you know how much back labor hurts or how hard postpartum recovery can be, it's hard to go into that delivery room feeling positive.

When I came home with my third baby, it was like I had to figure out how to be a parent all over again, then go about the work of teaching my older kids how to be siblings. Sure, the older kids were helpful in some ways — like getting diapers and holding bottles for their baby brother — but other times they were a downright hinderance — like when the baby was sleeping and they couldn't help but wake him up — and made parenting a newborn more challenging. They've vacillated between loving and hating their youngest sibling, or trying to ignore that he exists, which only made the situation more complicated. There's a pretty big age gap between my oldest daughter and youngest son, too, so they don’t have a lot in common (except a shared desire to play with the oldest's toys). It's been rough helping her manage her expectations, not to mention baby-proofing a house with Barbie shoes and Legos everywhere.

I thought I was tired as a mom to one, but only because I didn't know what the word "tired" really meant.

I'm also sad to say that my formerly easy-going second child became a stereotypical middle child almost instantaneously, doing all the stereotypical middle child things including, but not limited to: acting out, regressing, testing boundaries, and feeling perpetually left out. It's been quite the adjustment for him, being removed from the role as "the baby" and learning to be an older brother, and I'm so exhausted I'm not entirely sure I've helped his adjust to the best of my ability.

My third baby is so different from my other kids, too. Unlike my older kids, he is pretty laid-back, which is good because I don't know what I would do if he needed more of my attention. In some ways, though, he's more challenging. He has such bad separation anxiety that he cries when I leave the room, and he was a horrible sleeper until I let my husband sleep train him.

I'm also a different mom now. While I think that, for the most part, that's a good thing (because I know there's no way I could parent my third child the way I parented my first) I have to assume it's probably a little confusing for my older children. I no longer spend my time making organic baby food, or holding my baby all day long, or letting my children sleep in my bed, or stressing about the truly minuscule things that seem monumental in the moment. And while that's, again, a good thing, this change in my parenting style comes with a side order of guilt. Why couldn't I have been this way for my older kid? Rationally, I know it's because I lacked experience, but rational thought rarely sticks to an over-worked, exhausted, sleep-deprived brain.

My beautiful third baby changed my life in so many ways I couldn't have imagined possible, but he also made our family complete.

I thought I was tired as a mom to one, but only because I didn't know what the word "tired" really meant. I am now going on nine years of cumulative sleep deprivation and, guys, it hasn't gotten easier to manage. And that's when that guilt comes back in full-force, whispering in my ear that there's more I should be doing.

Having a third child also changed how I felt about myself. With my first baby, my body changed for sure — my hips were a little bit wider, my breasts a little more uneven, and although I eventually lost the so-called baby weight, I never fit back to my pre-pregnancy jeans. But three babies took a serious toll on my body, and, in turn, my self-esteem. A year later, I can’t seem to lose the last 20 pounds I want to lose, my stomach looks like a deflated tiger balloon, and my breasts are even smaller than they were before I became a mom, which doesn’t seem humanly possible.

I always tell my mom friends to think about their post-baby bodies as evidence of their serious badass selves, but when it comes to my own body I don't follow my own advice. I logically know that our society's expectations for new moms to "bounce back" after childbirth are unrealistic, and often dangerous, but after three babies it seems impossible to meet even the smallest goal of eating healthier or fitting some exercise in my already packed day. So I’m still having a really hard time dealing with my new, post three-baby body.

All that said, a year after having my third baby I think I have finally figured some things out. I hope Middleton gets there more quickly than I did, because there's no reason why we, as moms, should be blindsided. My beautiful third baby changed my life in so many ways I couldn't have imagined possible, but he also made our family complete. Even though it's been an exhausting, challenging, and emotionally taxing year, it's also been one of the best years of my life. I wouldn't change a thing, and I hope that, once the postpartum dust settles, The Duchess of Cambridge feels the same way.