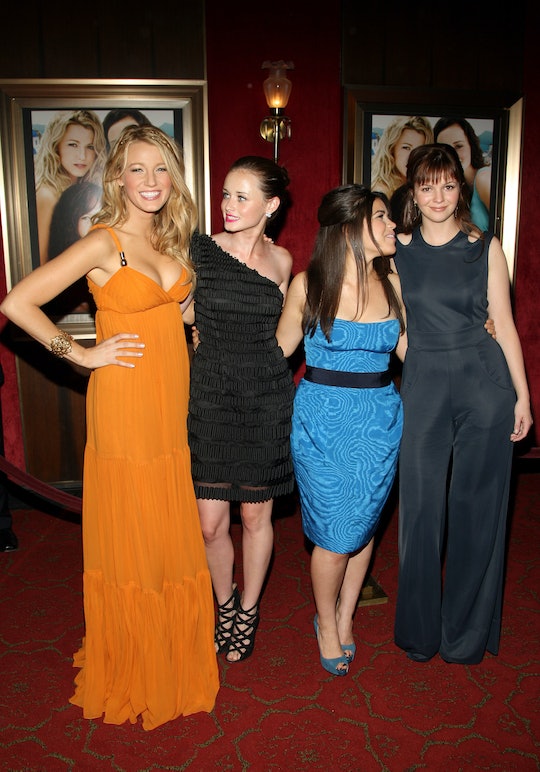 When the four stars of The Sisterhood of the Traveling Pants met on set, they were all years away from even thinking about becoming parents. And now, about 13 years after the first movie was released, the foursome has pretty much become The Motherhood of the Traveling Pants. (OMG, how awesome would an actual movie about the gang all as moms be?! Anyway...) America Ferrera is the last of the four set to become a mother, and as she gears up to have her first baby, she's unsurprisingly turning to her on- and off-screen BFFs for advice. America Ferrera's Sisterhood of the Traveling Pants co-stars have given her plenty of advice regarding pregnancy and giving birth, and the actress recently opened up about their main piece of advice in an interview with People.

Ferrera caught up with the publication in New York City on Tuesday, at an event for The North Face. “They all were like, ‘get the drugs,’ ” Ferrera reportedly told People, referring to advice she got from Alexis Bledel, Blake Lively, and Amber Tamblyn. “So we’ll see if I do. But I think it’s a very sound piece of advice.” Mothers who have given birth have endlessly different opinions regarding medicated vaginal births, and luckily Ferrera has a great support system of friends who can give her advice on the topic.

The four clearly have a close bond, and Ferrera really appreciates that — especially now that she's joining them as a mother. "It’s so wonderful to get to grow up with other women who deeply understand the specific experience of growing up in this industry," she told People.

Ferrera also took a moment to reflect on how quickly she, Bledel, Lively, and Tamblyn have grown up, telling People:

We get together with the kids, it just still blows my mind ... Blake was 16 I think when I met her, I had just turned 20. I couldn’t even go to a bar. Amber and Alexis were old enough to like go to a bar because they were just 21 and I was like just, "Alright, well, text me when you’re back at the hotel." ... And now we’re moms.

It's pretty cute to imagine the gang getting together with their children. When People asked Ferrera if the foursome hope their children will all form their own sort of sisterhood with each other, she replied, “Yeah, of course we do.”

And finally, Ferrera and her husband Ryan Piers Williams are expecting their first child sometime this year. She announced that they were expecting on New Year's Eve, so her due date is likely sometime within the next few months. The couple celebrated their upcoming child with a baby shower a few weeks ago, and it's clear that they are super ready and excited to become parents.

In addition to her due date, Ferrera has yet to reveal if she's expecting a boy or a girl. But either way, I'll be checking her Instagram daily for photos of her baby in a traveling onesie.