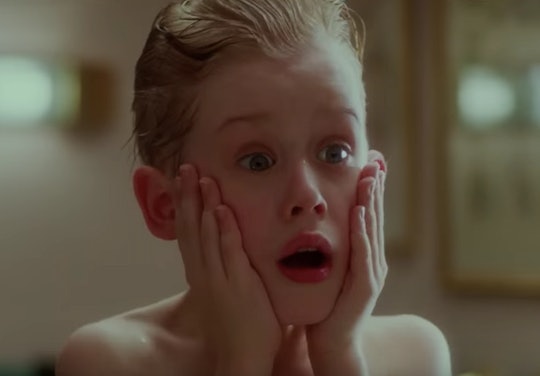 Excuse Me, But ... Where Are The Moms In Holiday Movies?

It’s A Wonderful Life. The Family Man. Scrooged. Jingle All The Way. The Santa Clause. A Christmas Carol. All extremely popular holiday films. All about men (often fathers, but not exclusively) who come to some sort of revelation or redemption in their lives during the holiday season. And if they aren’t about men, they’re about the holiday adventures of young boys a la A Christmas Story and Home Alone. It’s a familiar pattern, and it begs the question: where are the moms in holiday movies? Is it totally OK to simply cast us as supporting characters, or worse, brush us off altogether? If you ask me, as a mother who facilitates all the holiday cheer my family unapologetically enjoys every year, I say no. It's not OK at all.

For the most part, I'm a huge, shameless fan of holiday movies. But I must admit that it does get to be a little tiresome when I rarely, if ever, see my own kind of experiences reflected back at me. And as a mother to a 3-year-old son, and a writer who covers parenting and motherhood specifically, it feels like there’s very little in the holiday movie genre for someone like me to consume, enjoy, and recommend to fellow moms.

Of course, the recent release of the movie Bad Moms Christmas is definitely a good start. But why did it take so long to start showing that moms are worthy of being central characters, especially when the chaos of the holidays is a powerful theme? And more importantly, when are we, as a media-obsessed society, going to actually start sympathizing with mothers during the holiday season?

Growing up I watched Home Alone every holiday season, and you could say the mom, Kate McCallister (played by the incomparable Catherine O’Hara) is a major character in the film. Except, well, she's not. Yes, the whole premise is that little Kevin McCallister (Macaulay Culkin) gets into a fight with his family (read: his mother, who is arguably the harbinger of all things cruel and unusual) and ends up home... alone. Forgotten. Left behind. A shadow of a thought during a chaotic time. A grave mistake made by, you guessed it, the careless mom.

As a mother trying to "spread Christmas joy" during the holidays, I know parents could all benefit from watching an exhausted character trying to hold a massive household together during arguably the most stressful, financially difficult time of the year.

And then the story documents Kevin’s misadventures as he attempts to survive on his own at home (and, in part two, a fancy hotel in New York City). When we do see Kate, she’s either busy trying to get her family to do this or that, or she's doing her best to get back to her son as quickly as possible. The entire mess is Kate's to fix. No one blames Kevin’s father or his weird uncle or his many, many siblings. They blame Kate because, of course, she’s the mom.

Personally, I appreciate Kate’s character more now that I'm an overworked mother. She's flawed, like anyone else, but she's also a caring mother who would do damn near anything to get back to her boy in time for Christmas. Why couldn’t a movie like Home Alone exist entirely from the mother’s perspective? It worked for Planes, Trains, and Automobiles. As a mother trying to "spread Christmas joy" during the holidays, I know all parents could benefit from watching an exhausted character trying to hold a massive household together during arguably the most stressful, financially difficult time of the year.

Another notable mom in holiday films is Doris Walker (played originally by Maureen O’Hara and, in the '90s, by Elizabeth Perkins), from Miracle on 34th Street. For those unfamiliar, it’s the story of a little girl who was raised to not believe in Santa Claus. Eventually, however, she meets the real Kris Kringle and, as a result, finally believes in the magic of Christmas. The little girl was raised by Doris, so automatically the mom is the go-to unlikable character. She’s a hard worker, independent, successful, and level-headed, but most people watching automatically think, “What kind of mother doesn’t allow her child to believe in Santa?”

Perhaps she didn’t want to dive into the patriarchal notion that we need to be "good" in order to get presents from some bearded guy who watches us all day (and night!)? Maybe she wanted her daughter to believe in herself, and in other real people, instead? Regardless, by the end of the film even Doris is made to believe in the powerful white man in the distinguished red suit. But how much more do we really get to know about Doris, other than that she’s essentially the story’s “villain”?

They acknowledge that mothers are important, but do they actually give us moms a voice?

There’s a small exception to the overall lack of a inspiring mom characters in holiday movies, but only when she’s serving as the matriarch of a big family. We see this in movies like The Family Stone, This Christmas, What’s Cooking, and Nothing Like The Holidays. Each of these films has a lengthy cast of characters, and there’s a matriarch that has a pivotal role in relation to her children. But while we get to know these respective mothers just a bit, the movies aren’t actually about them. They’re about the entire family dynamic which, yes, might be lost or at least different if a mother wasn't pictured, but still fails to highlight moms as autonomous human beings. They acknowledge that mothers are important, but do they actually give us moms a voice?

There are a few holiday-adjacent films that might actually give mothers an important, slightly more obvious role. Take Little Women, for example. Marmie is a strong, independent mother raising her four daughters while their father is off fighting a war. She raises her daughters to also be strong, independent women who follow their dreams. The film (and book on which it’s based on) doesn’t only take place around the holidays, though, so I don’t know if it qualifies as a holiday film. And again, the real stars are the daughters themselves. I give Marmie credit, but honestly, I don’t think we ever really got to know much about her on her own, outside the relationship she cultivates with her family.

There’s also Home for the Holidays, wherein Holly Hunt stars as the kind of mom you’ve either been friends with or are yourself. In the film, Claudia (played by Hunt) has just been fired from her job and heads to her own parent’s house for the holidays. She has a daughter herself, but the daughter decides to spend Thanksgiving with her boyfriend instead of her mom. It’s one of the only films, holiday or otherwise, where we get to see a mom not really acting in the role of mother, but as an independent person, with parents of her own, siblings of her own, and relationships of her own. Hell, she even gets it on with Dylan McDermott.

I’d get tickets for a movie about a mom who is also a thief and poses as a mall Santa for her next big heist a la Bad Santa.

And then, of course, there are the Hallmark Holiday Classics. Love them, hate them, or just ignore them (since they’re notorious for a blatant lack of diversity and depicting needy, co-dependent women), they continue to be popular during the holiday season. Do these films give mothers a voice, though? There’s Northpole, a film about a child trying to get his over-worked single mom (played by Tiffany Thiessen of Saved By The Bell) into the holiday spirit. There's Christmas At Cartwright’s, a movie about another single mom (played by Alicia Witt) looking to make extra cash by getting a holiday job. She meets a dude and her life magically improves. And then there's Help for the Holidays, another movie about a single mom who needs help getting into the Christmas spirit.

So no: these films don't do the complexities of motherhood a lick of justice as far as storytelling is concerned. In fact, it almost feels like these movies are meant to make moms feel bad (especially single moms) about not being picture perfect.

I could go on, extensively, about the lack of representation mothers face in films. We are so frequently pigeonholed — as the tired or busy single mom, or the cold and busy working mom, or the tired and busy matriarch who has to keep it together for the family — that we're usually one-dimensional, over-looked, boring characters.

I’d like to see a holiday movie about a mom who goes on a wild, cannabis-laden adventure like A Very Harold and Kumar Christmas, except maybe the powers that be cast Ilana Glazer and Abbi Jacobsen. I’d get tickets for a movie about a mom who is also a thief and poses as a mall Santa for her next big heist a la Bad Santa. Hell, Lauren Graham can still play the single mom that likes shacking up in a dressing room, because guess what? Lesbian mothers, bisexual mothers, and queer mothers exist in the world! Where the hell are they in movies, much less in holiday movies?

Yes, Bad Moms Christmas is a start, but as far as I’m concerned we’ve got a ho-ho-whole long way to go.