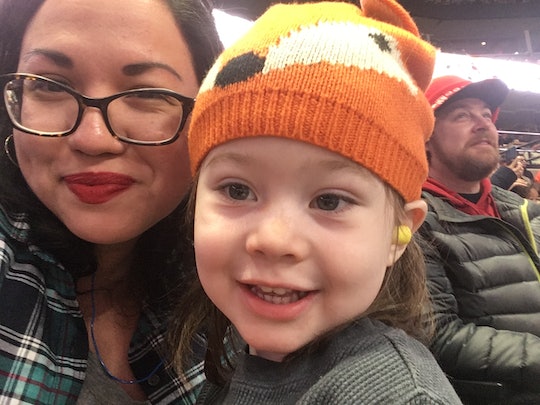 Honestly, I Wish There Were Fewer White Kids At My Kid's School

As a feminist queer Latina, diversity has always been important to me, and recognize that diversity brings out the best in our society. If you have a room full of people who've all had similar life experiences, it’s hard to bring about any change, let alone learn anything about people who are different from you. So when I became a mother, I knew I wanted my son to grow up in a diverse community. I never imagined that he’d end up in a predominantly white school, though. To be honest, I wish there were less white kids at my kid's school.

When I first moved to Denver, Colorado, I knew I was entering uncharted territory. I grew up in a heavily Latinx enclave: Miami, Florida. It was a relatively diverse city, with Latinxs from practically every Latin American country, including but certainly not limited to: Cuba, Costa Rica, Chile, Nicaragua, Panama, and Peru. We also had a large population of Haitian, Jamaican, and Bahamian immigrants, as well as few transplants from the North (who were largely Jewish). You might occasionally meet people of Asian and Middle Eastern descent as well. As a result, white people were few and far between.

I enjoyed growing up in a city where you could get cuisine from various parts of the world, and hear different languages spoken other than English. I know I was lucky to have grown up away from the anti-Latino prejudice that is more prevalent in other parts of the country, too. Now, I'm not saying Miami or South Florida are without their own problems. There’s definitely some anti-Black and anti-Indigenous sentiment among Latinx populations (as someone of Nicaragua-Mexican heritage, I received a bit of that prejudice myself from my blonde, lighter-skinned Latinx classmates). Still, it was nothing compared to some of what I’ve seen, and heard about, in other parts of this country.

I know my son doesn’t notice the lack of diversity in his school, but I do

But now that my family lives in Denver, Colorado, I find myself, more often than not, feeling like a fish out of water. It’s a fairly white city (80 percent white, 10 percent Black, and 30 percent Hispanic), and it’s even whiter at my son’s school. While I’m not totally certain, I think my son might be the only student of color in his class (which doesn’t say much, since his father is white and he’s much more fair-skinned than I am). I know my son doesn’t notice the lack of diversity in his school, but I do. And to be honest, it bothers me. He’s been there for well over a year, and both of his classes have been all white. I’ve considered transferring him to a different school, but the school is perfect for him in every other respect: close to home, trustworthy teachers, cheaper than other area schools, and it’s a yoga-based curriculum.

Because my son is the only Latinx kid (and possibly the only one who hears Spanish spoken at home), he’s not learning his second language as quickly. When I was a kid, we received reading and math and science in both languages. And when we lived in Miami, Florida, my son often heard his grandparents speaking Spanish. But now he only hears it when I’m making the effort to read him Spanish-language books or play him Spanish-language instructional videos. And while they finally have one teacher at his school who speaks Spanish, I imagine the language is not as heavily emphasized.

Being the only Latino in his class, he might be expected to teach others about his culture, and when he barely has the time or opportunity to experience it himself.

Additionally, he’s not learning about his culture to the degree I wish he was. I’m not just talking about Nicaraguan and Mexican culture, either, though I do hope he learns more about these over time (this will be especially difficult, though, as there appear to be no Nicaraguans in Colorado). Because I grew among a myriad of Latinxs, I got to know about Cuban culture, Venezuelan culture, Colombian culture, and, well, the list goes on. I learned about cuisine and music and film and holidays and traditions and, frankly, it was awesome getting to learn about so many different cultures and even getting invited to events celebrating said cultures. Being the only Latino in his class, he might be expected to teach others about his culture, and when he barely has the time or opportunity to experience it himself.

More than that, because he isn’t seeing and interacting with as many people who don’t look like him (since he’s fairly white), I fear that he will immediately see people of other ethnic backgrounds as “others.” I fear that he might overhear or witness someone say something negative or disparaging of other people. I worry that, as he grows older, he might not understand that we are all inherently the same, and that he might pick up on prejudices from the people around him. While his current preschool emphasizes empathy and kindness, what happens when he starts kindergarten? When he reached third grade and then fifth grade and then middle school? What happens if we’re still here and he sees himself as part of the white majority? Or what if the other white kids see him for the Latinx kid he also is, and what if they don’t entirely see that as a positive thing?

I know being in a diverse preschool isn’t everything, but I do feel like it would help my son find himself if he was surrounded by children of different races and ethnicities and abilities, who speak different languages and celebrate different holidays, and whose families are different. I want him to know that being different is OK and that it’s often something to embrace and celebrate, instead of hide. I’m doing what I can from home, and I know his teachers are doing the same. But I know that, as he gets older, I’ll look to enrolling him in a school that might have a stronger track record when it comes to diversity. It might not be an important factor for some folks, but it is to me.