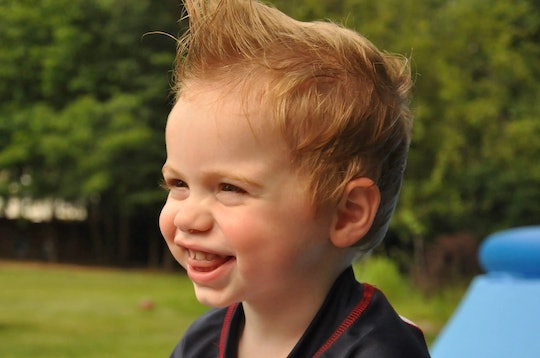 Gather, children, and hear the tale of how one unpretentious, carefree 2-year-old boy broke a generational curse. The story of how my son got the whole family to say "penis" isn't heroic in the way St. George and the Dragon is heroic, or even how Malala Yousafzai is heroic. It's heroic in a quiet way, but in a way that goes beyond the utterance of a particular, phallic, five letter word. Heroic in a way that lasts and allows for more heroism down the line.

I grew up Catholic. Italian and Catholic. For many of you, perhaps, that's all you need to know to understand that saying "penis" is not something that comes naturally to my people. Here's a thing with Catholics and Catholicism: there's a lot they do very well, but talking openly and positively about sex? Not so much. Talking about my body or anyone else's was a conversational red light. I didn't know the word "penis" until well into grade school. The same goes for the word "vagina." Vulva, clitoris, and labia came years later. When I did bring my new words home, I would be shushed by my embarrassed family. I wasn't harshly punished or anything, but it was clear that what I'd said was deeply inappropriate... somehow. So, as you can imagine, when I began to learn about sex, I kept everything to myself. No mention, no questions, and I worked hard to maintain the ruse that I knew absolutely nothing about it.

Now, my mom grew up in an explicitly sex- and body-negative home. I don't say this to throw shade at my grandparents, who were a product of their upbringing, culture, and generation, but rather to explain what followed. My mom recognized how such attitudes did her dirty, but having been raised with them, wasn't exactly sure how to approach an alternative when I was growing up.

So she was determined not to be sex-negative, but she didn't really have the tools to be sex-positive and, in my experience, unless you're intentionally sex-positive, that basically means you're going to be sex-negative without realizing it because society in general (not just Catholic or Italian-American society) has a long-ass way to go on this issue and that permeates your attitude often just as much as explicit parental instruction. So I wasn't told "penis" was a dirty word, but any use of the word "penis" (or similar terms) would be accompanied by an uncomfortable squirm or a meaningful, mildly chastising look.

It had enough of an impact for me to decide, before my children were ever born, that I was going to continue the work and take things a step further than my mom did: I wasn't going to stop at not being sex- and body-negative, I was going to be explicitly sex- and body-positive. I didn't ever want to have "the talk," I wanted to talk about bodies and sex and health from day one (in age appropriate ways, of course). I wanted to drill home ideas of self-esteem and respect. Of loving their bodies and themselves. I needed them to know about consent, that it's something everyone needs to give and receive before anything happens to their body. A big part of this mentality, I felt, was using anatomically accurate words to describe those bodies: penis, vulva, breasts, etc.

And here's where my son comes in.

When he was about 6 months old, he, his father, and I, moved in with my grandparents. Honestly? It was amazing. I'd always had a great, very close relationship with my grandparents, who are kind, generous, supportive, lovely humans, and my family has a long and happy history of inter-generational living situations. I was happy my child (and, eventually, children) would have that experience as well.

In the years between my mom growing up and my son being born, my grandparents had come a long way in terms of socially progressive attitudes. I don't even think I'd necessarily think of them as particularly sex-negative anymore. And, because I'm their grandchild, they were able to tolerate more from me, specifically. They'd already sort of ticked me in the column of "get-a-load-of-the-kooky-feminist" and also, I wasn't their child, so I wasn't a direct reflection of them. So they were more tolerant of anything that might raise eyebrows among their friends.

So I didn't hold back under their roof. It's not that I went out of my way to make a point, and certainly not to make them uncomfortable, but I didn't let their discomfort stop me in my "my child will be body- and sex-positive" mission. So there was a lot of "penis this and "penis that and "blah blah blah penis blah blah blah."

My grandparents found this equal parts entertaining and scandalous.

They recognized their own baggage. They wanted to support me. So they did their best and, I must admit, I'm pretty impressed.

"Can't you just say wee-wee or pishadeel?" my grandmother would laugh. "Isn't that a little mature for him?" my grandfather would grimace, but with a smile to let me know he was trying to be hip but was also concerned.

Whenever this happened I'd play a game. I'd point to my elbow.

"So why are we using different words for the stuff in our underwear? Just say it! It's not a bad word!"

Reader, they did not say it. Ever. They tolerated my saying it, but would always revert to the words they were more comfortable with. And, hey, to each their own. I was going to foist my terminology on them, even if it was my terminology that was medically accurate.

Then my son got older and learned to speak, as children do. And when he did he used the words for his body we taught him.

And maybe it was the ubiquity of the term after a lifetime of avoiding it (kids are obsessed with their genitals so it comes up in conversation more than incidentally). Maybe it was seeing a small child just naturally take to a word and associate no shame or discomfort with it whatsoever and realizing there wasn't inherently any, but damned if it didn't catch on.

One day, I forget the context now, my grandmother was talking to my son and said, "... pishadeel... Oh, excuse me. Penis."

My grandfather was a little later to catch on, but he did eventually hop on board the penis train, too.

And it's not like they were running around yelling "penis" at the top of their lungs. It wasn't that the cutesy terms completely vanished. But they respected what I was trying to do, as a parent who wanted to make sure her child grew up loving his body and having a healthy relationship with sex. They recognized their own baggage. They wanted to support me. So they did their best and, I must admit, I'm pretty impressed.

So, yes, my son got my entire family to finally say "penis," but, credit where credit's due here: it was a group effort decades in the making.