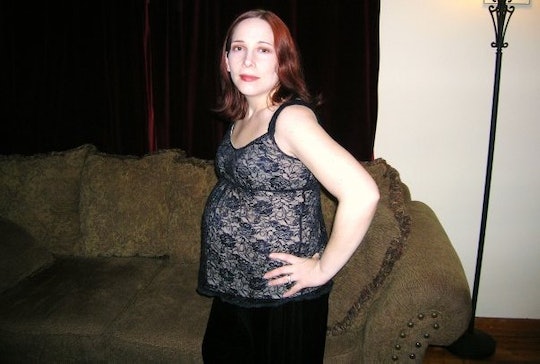 When I was about 12 weeks pregnant with my second baby, I had to host a cocktail party for work. The problem? Well, no one knew I was pregnant. I bought a new dress, because I couldn't squeeze into anything I owned and was already showing, and spent the night holding a glass of sparkling water with lime and sneaking off to throw up. It was important for me to keep my pregnancy a secret, though, and for a variety of extremely valid reasons. So, no, I didn't tell anyone I was pregnant then, and I didn't plan to tell anyone later, either.

Halfway through the night, however, a nosy co-worker blurted out, "Are you pregnant?" I whispered yes and immediately wanted to sink into the floor. I hoped no one else had heard, but word traveled fast and pretty soon people were offering tentative congratulations and asking me when I was due. When I told them how far along I was, nearly every single person asked, "Why didn't you tell me you were pregnant?"

I wanted to say, "Because it's none of your business," or, "I have my reasons." Instead, I simply ignored the question entirely while throwing a "thank you," or a, "we're so excited" their way. I knew what was coming — the one question they were really wanting to ask — and I figured I needed to save my pregnancy strength for the grilling to come. And sure as you-know-what, that question came almost immediately. "So, are you planning to continue working?"

That question, and the loaded meanings that go with it, was exactly why I didn't want to share my pregnancy with anyone. I was over the moon about being pregnant, but also terrified that getting pregnant would impact my career. And, unfortunately, my fear was very, very valid.

Once the cat was out of the proverbial bag, and my husband told people at his job I was pregnant, not a solitary person said anything to him other than, "I'm so happy for you," "Congratulations," or "Good job." Yet here I was, answering intrusive questions and dealing with people assuming that my decision to have a baby would either hurt my ability to be a productive employee, or leave me unwilling and unable to go back to work. He was praised, and I was endlessly questioned.

The first time I found out I was pregnant I told everyone right away. And, as a result of my filter-free excitement, I learned the hard way that people at work won't necessarily be as excited by your pregnancy as you'd hope they'd be. In fact, my coworkers were pretty annoyed that they had to accommodate my changing needs during pregnancy and pick up the slack during my maternity leave. I didn't feel respected as a coworker or an employee or simply a human being... I felt like a burden.

I had seen other women face discrimination at work when they got pregnant, left on maternity leave, and returned to work after 12 weeks. I knew the same could, and probably would, happen to me, too.

I was hopeful I wouldn't experience the same treatment the second time around, though. I always wanted to have two kids, and I considered the timing to be pretty perfect when I found out I was pregnant with my second. My 2-year-old daughter was finally potty-trained, my husband and I both had great jobs, and I had already experienced pregnancy once before. I knew what I was getting myself into... or so I thought.

The day after our first attempt at "trying to conceive" sex, I got a call letting me know that I was a finalist for a position I had applied for a few weeks earlier. It would mean a huge promotion, a ton of money, and some significant momentum in terms of my career trajectory. As a result, I decided to put the brakes on the whole "trying to conceive" thing and wait a little longer to try for baby number two.

I had a chance to show my new team who I was as their manager before they saw me as "just a mom."

A few weeks later, however, I discovered that I was pregnant. I was in absolute shock, to say the least. I had landed the new position and was just about to make the transition, so I was terrified that people would judge the hell out of me for going out on maternity leave only a few months after starting a new job. And while I knew there were rules in place about maternity leave and medical leave, I also knew that those rules didn’t necessarily mean that my boss, co-workers, and colleagues wouldn't treat me differently, or that my pregnancy wouldn't end up impacting my career. I had seen other women face discrimination at work when they got pregnant, left on maternity leave, and returned to work after 12 weeks. I knew the same could, and probably would, happen to me, too.

I decided to keep my pregnancy a secret until I absolutely had to tell people, but that was much easier said that done. I had hyperemesis gravidarum, so I was throwing up several times a day in the bathroom across the hall from my office. And while I was grateful that I had enough sick leave to take care of my health during pregnancy, I was also worried that any time off I took would decrease the amount of paid leave I would have after my baby was born. (It did.)

I started wearing baggy clothes, since I showed much earlier during my second pregnancy than I did during my first. I had to learn a new job, get to know a new staff, and prove myself in a new position while I was exhausted and hormonal. In other words, I cried a lot during those first few weeks of my pregnancy.

I am glad I waited to announce my pregnancy, though. I had a chance to show my new team who I was as their manager before they saw me as "just a mom." And once I announced my pregnancy there were people at work who outright told me that I was the wrong person for the job, all because I dared to get pregnant and take a promotion at the same time. So while I had a few weeks of just being a coworker, those weeks didn't seem to matter (to some people) when I started showing up to work with a baby bump.

It's 2018, and women still have to worry about people judging them for getting pregnant. We still have to worry about getting pushed onto the "mommy track," or even facing outright pregnancy discrimination at work. When you consider how people treat pregnant people in the workplace, it's no wonder that some of us decide not to tell anyone we are pregnant... until we absolutely have to.

If you think you've experienced pregnancy discrimination, you aren't alone. You can file a complaint against your employer by contacting the U.S. Equal Employment Opportunity Commission or calling 1-800-669-4000.